Believe me I would never make fun of Bear. This and the last post I did on this topic were not criticism of Bear. I know he is doing his best. In the last post, in one of the e-mail messages written to me, I (very gently I think) did point out his mistaken use of a a few words (atheist instead of athlete), because I wanted him to slow down and think about what he is writing.

I am dyslexic just like my mother, so yes, I know exactly how hard it is to look up a word when you don't know how to spell it. I also know we all make mistakes (I tend to type directly into my Blogger account and often forget to do spell check - I appreciate that no one criticizes my typos). In this case the majority of the mistakes made were not homophones or typos that still spelled words like coach and couch, but that he obviously he ignored the little red line underneath entirely.

On the rare occasion that Bear lets me help him with school work, I work hard to be helpful, not critical. While I'm a perfectionist myself, I try to limit putting any expectations on the kids to only what they are actually capable of, and occasionally challenge them to try to improve on that. I would NEVER make fun of a child to their face, criticize, yell at, or tease my child - or allow anyone else to do so. That's why stupid is a "naughty word" at our house.

I do admit that I try to find the funny/ absurd in things because often if I don't laugh, I'll cry. This blog and when I'm alone with Hubby or Grandma are the few places I share these though. NOT in front of the kids.

Truthfully, I know the school system is doing their best too. Just like us, they did not make him this way. He moved a LOT as a child. His C-PTSD (complex post traumatic stress disorder), untreated (until 2 years ago) bipolar disorder, hyper vigilance, need for quiet to concentrate, short term memory issues, ADD (attention deficit disorder), cerebral dysrhythmia, medication side effects, etc., all make it very difficult for him to learn. There must be MANY gaps in his education. It is possible that he doesn't have learning disabilities. I just find this VERY hard to believe. 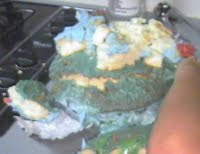 Either way, I don't feel that the school system he's in now is trying to fill in those gaps. They seem to be just layering on over the top all the stuff he "has" to learn because of the No Child Left Behind Laws. This is like trying to cover a crumbly, broken cake with icing. Might look good, it might not, but it's still broken and unsturdy. You're not going to be able to keep adding layers without it collapsing.


Do I believe Bear also has learning disabilities? Yes! When Bear first came here they used his testing and assessments from his previous school in rural Nebraska. These are good for three years so the school hasn't assessed him on all subjects. We've demanded asked that he be tested in all subjects now so are hoping to have the results of that in November.

Hubby came up with a better analogy for the type of education our children are getting. Think of honeycombed layers of rock. Each year there have been gaps in the kids education -concepts the children couldn't or didn't learn. This could be because of brain injuries, ADHD keeping them from focusing, learning disabilities, concepts missed for whatever reason (too truamatized to function and learn, maybe they moved and that concept was taught at a different time, out of school for doctor's appointments or illness), distractions from what's being taught, inability to understand because they don't have the basics.... Each year is layered over the last.

Most times what we learn builds on what came before (you have to know how to do addition before you can understand subraction or multiplication). Sometimes in order to teach the next subject the gap had to be filled in, while other times it might just have been skipped.


There can be huge gaps in our kids education with sink holes waiting to suck them down. Often it seems that the school system is just ignoring the holes and their consequences (Bear passed 8th grade math but failed the state assessment test despite modifications and repeated retesting), or fastening rickety rope bridges over the chasms below instead of trying to fill them up.


One of the things I really liked about the private school that Kitty went to was they went back and tested her over everything. They identified all the gaps, and if she missed a major concept in 3rd grade that effected more and more areas the longer it went unfilled, they didn't send her back to repeat all of 3rd grade, they just taught the one identified missed concept.


She then retested, and didn't have to repeat any concepts that fixing that one missing concept automatically filled. She was starting sixth grade and there were concepts from many years before that she didn't get. They were able to help her advance about 1 1/2 years, almost 2, in about a year. Her learning disabilities made this whole thing more complicated and in the long run the school was unable to help her with those, but I still prefer this method. (If you're interested the program is also available for homeschoolers. It's called ACE (Accelerated Christian Education) and the children work in PACE workbooks. Kitty was able to do these which surprised me since I figured with her ADHD she wouldn't be able to sit still that long.

I really wish this were an option for Bear. Instead, he takes grade level classes that are small group and simplified/ modified. In my opinion when he graduates he will not have a real high school diploma. He will have to go to junior college and be assessed, at which point he will have to take more classes to fill in those gaps. 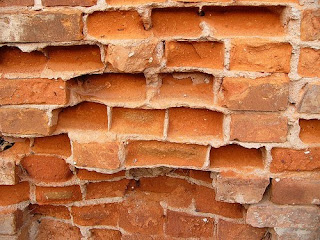 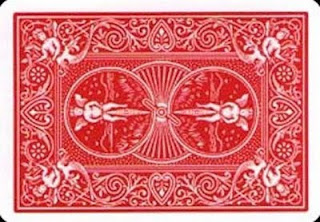 Another good analogy (apparently I'm into analogies today!). Substitute 'school' for D.A. and 'education' for case.

Vinny Gambini: The D.A.'s got to build a case. Building a case is like building a house. Each piece of evidence is just another building block. He wants to make a brick bunker of a building. He wants to use serious, solid-looking bricks, like, like these, right? [puts his hand on the wall]


Vinny Gambini: Let me show you something. [he holds up a playing card, with the face toward Billy]


Vinny Gambini: He's going to show you the bricks. He'll show you they got straight sides. He'll show you how they got the right shape. He'll show them to you in a very special way, so that they appear to have everything a brick should have. But there's one thing he's not gonna show you. [turns the card, so that its edge is toward Billy]


Vinny Gambini: When you look at the bricks from the right angle, they're as thin as this playing card. His whole case is an illusion, a magic trick. It has to be an illusion, 'cause you're innocent. Nobody - I mean nobody - pulls the wool over the eyes of a Gambini, especially this one. Give me a chance, one chance. Let me question the first witness. If after that point, you don't think that I'm the best man for the job, fire me then and there. I'll leave quietly, no grudges. All I ask is for that one chance. I think you should give it to me.

Quick! What's the name of that movie?!

My Cousin Vinny!
Do I win?
Love your blog!

We are doing an online charter school and having to deal with some of the same problems. They are prepping my son for state testing that's one grade above his level. That's frustrating especially working with our slow progress of filling the gaps. Fortunately I can make most of it fit his needs, but we will not be doing the online charter school next year.