Bear and I have been having issues lately. I'm resentful for having to play detective and dedicate so much energy to him. He's angry at me for "holding a grudge," and not trusting him enough to allow him freedoms.

Due to only having one car (and secretly wanting Hubby to get a little therapy/ support too), Hubby usually attends my therapy sessions. Most of the time he catches a nap on the floor (he's so cute when he snores), but he does participate sometimes. The last couple of weeks we've talked a lot about Bear. My therapist has treated both Bear and Kitty so she knows them fairly well.

As mentioned in the previous post I am operating on an empty love tank and am trying to find ways to handle this. Bear is the biggest drain on my time and energy, and I'm an all or nothing kind of gal, so I've talked a lot about cutting him off (see the post "I quit"). This upsets Hubby because he sees it as reacting the way I have with "Puppies" in the past and it doesn't seem right to him. I remind him that I haven't actually cut Bear off, but Hubby is upset because he feels that Bear knows my feelings about him. 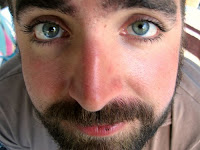 (this is not one of my "Puppies", but I wanted to show you why we called them that. They always have "Puppy Dog Eyes" and look like kicked puppies.)


I would argue with this, because:


a) I'm a pretty good liar actress, and I have never once told him I don't like him very much or admitted my feelings in any way. Bear had no clue that we were talking about not allowing him to return while he was in Meridell. The fact that we didn't and "never gave up" on him are VERY important to him.


b) Bear is horrible at interpreting other's emotions and body language. It's part of his cerebral dysrhythmia, C-PTSD, and RAD....


c) I haven't actually changed my behavior toward him ...yet? I'm still checking up on him, forcing him to talk about his feelings and doing detective work.


At therapy a couples of weeks ago, Bear was "fussed at" by his therapist for isolating himself from the family. So when a couple of days later Bear told me he wanted to stay after school to do some volunteer work for JROTC on Monday I told him no.

He already comes home between 6 and 7 pm two days a week because he does PT (physical training with JROTC) after school and has a leadership role. He's also been leading the students needing PT makeups on a third day. That would have been 4 days where we pretty much didn't see him at all. So I also told him he couldn't lead the makeups anymore either. He was not thrilled.

(This is not Bear's PT group, I just wanted to give you a visual!)


When Bear didn't come home on time, I called Hubby and told him I was pretty sure Bear had done the makeup PT even though I told him not to. He had. Hubby, Bear, and the JROTC Colonel had a long talk about "communication." Bear of course claimed that he didn't know I didn't want him to do the makeup. I knew he did it deliberately. Hubby and the Colonel gave him the benefit of the doubt.

With his new attachment therapist, Bear has been increasingly negative about family. This may be because that is the therapist's focus so it keeps coming up, or it may be because we're there and he wants to hurt us because he's mad about having to be there and having fewer freedoms, or it may be he's always felt this way and been keeping it to himself. I don't know. All I know is he keeps giving the therapist mostly one word answers. Getting him to communicate with us has often been like pulling teeth, but he seems to be working harder than usual at it.

Bear's "homework" the week before had been to write about a time when he remembers being happy. He wrote about his favorite memory. Fishing with his Grandpa - before age 5. When pressed this was the only happy memory he had. The therapist asked if Bear had any happy memories about our family and Bear just shrugged (now we're down to NOT answering with words! *sigh*).

Finally the therapist asked what is happy or good about your relationship with your mom (Me). Bear eventually said, "Well, I know she cares about me..." The therapist started to say something, but Bear interrupted, "but she always holds a grudge against me."

The therapist asked why Bear said something nice, but then "took it back." Bear didn't understand.

The session was of course past over at that point so we had to leave. I'll post about the long conversation Bear and I had in the car on the way home and in a parking lot in my next post.

Bear is being 2. He is just a very smart and big 2-year-old. 2-year-olds hate having to come inside while they were playing. But they hate even worse the feeling that there isn't a grown-up in control.

You have said "I will be your grown-up" and so he is supposed to be safe to act like a 2 year old, he acts like one (because he needs to!) and then you get mad at him for acting like that and he doesn't understand why you are mad. He needs to know that you are the one in control. Your job is just so much harder when you can't pick him up and put him in his playpen. ... He may not fully accept you because you do not fully accept him ...

I did such a lousy job with this stuff with my eldest. He still really cannot handle it when I cry (or freak out) I can almost see him turn 2 when I do, but then his actions are to yell at me and follow me around and I can't calm down with that ...

Every time your husband sides with Bear over you, he pours out more from your cup. You can't solve such a huge problem if you aren't a team.

Having raised three "normal" boys, I'll tell you a bit about what's "normal" for a high schooler.

All three of my sons played football, which was a DAILY after school practice. 5 days a week for 3-4 months they would get home between 6 or 7pm, eat dinner, then watch TV and/or do homework, go to bed at 10 or 11 (depending on age) and get up at 6:30 the next morning and start it all over again. *(Yes, I know they weren't getting enough sleep, but they're all owls and wouldn't go to bed any earlier.) Football helped my boys build up self-confidence and self-esteem in a protected, regimented, strict environment, similar to the ROTC program Bear is in. It is not uncommon for high schoolers to have this kind of a schedule year-round with various seasonal sports.

Yea, I know my kids are different. I could trust them and I knew they were in a safe environment. I knew that this program was helping to give them the "wings" they needed to survive adulthood. Some of my friends had kids they were anxious about; those moms and dads picked their boys up from practice and drove them home in their own cars so they could talk about the boy's day and debrief a bit after a grueling practice. With three other kids at home I always let my kids figure out their own rides/carpools or busses to get home on their own... and most of this was before they had cell phones.

You know I still struggle with my boys even though they're in college now. They seem to always need money and/or help from us. I'm not saying I am or was a perfect mom, far from it... but I hope that we didn't go too far off track.