Ponito's skin was absolute perfection this morning (although there are clumps of baking soda everywhere on his bed now). So I guess I can assume it was something on the new stuffed animals that he was allegic to or maybe a cat chose to sleep on his bed while he was at Grandma's. He's not allergic to the cats, but one of them "escapes" frequently ("You are an INDOOR cat Mr. Snuggles!!") so there might have been something on his fur.

Ponito is not really prone to allergies anymore (he was allergic to glutens as a little guy, but luckily outgrew it), but the Cedar/ pollen in our part of the world is super high right now. There's a saying around here that if you don't have allergies, moving here will give them to you! The airborne allergens could be making him more susceptible to whatever allergens were in his bed.

Obviously I'll wash everything in his bed, but I'm not sure what to do about the new Beanie Baby stuffed animals. He's been convinced by the thrift store owner that they will be worth a fortune someday because they still have their tags on - so I can't wash them. (Good suggestion that it could be bed bugs Purple, but since his skin was blemish free this morning I have to assume it wasn't bug bites). 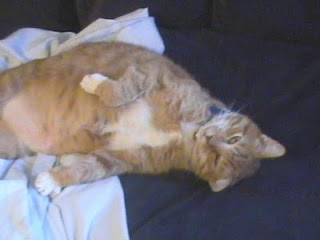 Posted by marythemom at 8:41 AM

Email ThisBlogThis!Share to TwitterShare to FacebookShare to Pinterest
Labels: Ponito

I am glad he is OK. And hope it was something the cat brought in!

I'm glad it's ok but just as an FYI.. we have bedbugs, lice and scabies in our state shelters. They have spent millions so far trying to get rid of them. One of my birth parents stays in them quite often and then brings the kids clothes and stuffed animals as gifts from the donate boxes. I would just wash them and give them to the kids until I saw little creepy crawlies trying to escape the wash cycle one day. We have to ban gifts now because of that. You never know where the stuffed animals came from at a second hand shop, it could have come from a home with bugs. In fact I understand flea eggs can lie dormant for months until heat and vibration cause them to hatch. (Yes, I could bag it or wash with bleach etc but if the state is spending millions and losing the battle against bugs I just can't take the chance. I don't have millions and I'm bug phobic [shudder].)
Good luck!

What are the names on the beanie babies. If they're ones I have here I'll send replacements. (We forrayed into the Beanie Baby fad in the 90's.) Throw those things in the GARBAGE! Is it worth the risk?