As you know, Bear is rapidly going downhill (grades of As and Bs now are Ds and Fs, he's depressed and telling everyone he is "over everything" and "giving up", he's told me he wants someone to hit him so he can "beat the hell out of him," he wants to go to the off campus suspension program, his attendance has never been great - but now he's skipping classes and tardy to at least one class every day...). Quite frankly not much has changed at home, but school is finally having to pay attention because this effects them.

I have a pretty good idea why the change.

First, we finally told him that his life plan of being in the military or the police is not an option due to his mental health and medication issues. Of course we've known this for years, but were trying to get him to consider other options before we told him for exactly this reason - no motivation means no work. He didn't see a need to consider other options when he had a plan and a back up plan, so we finally had to tell him.

Second, no matter how many times I tell him otherwise, he still doesn’t believe me that he can’t move out at 17 so he’s pushing us away in mental preparation for it (he turns 17 this Summer).

Fourth, the public high school is (finally) much more aware of his actions and behaviors and is really clamping down on him. He is no longer getting away with wandering the halls freely, picking on other students, or many of the little manipulations that he did before, and he has nowhere to blow off steam because he has deliberately alienated himself from all the staff in retaliation for them clamping down on him (vicious cycle!).

Yesterday was the big parent/teacher conference to try to figure out how to deal with this. Instead it ended up being Hubby and I explaining to the staff, why Bear acts the way he does and some ways to handle him. Good information, but should have been covered at the beginning of the school year... Not Now!!

In other words we didn’t address any of my concerns or how to handle them. So Bear will limp through the end of the school year, and since he did so well last semester he’ll still pass all his classes and get promoted to 11th grade. Nothing will happen until next year… after they wait to see if things magically improved over the Summer.

He probably won’t be able to attend Summer School because they don’t offer Special Ed most of the time. The last two years he’s managed to get himself kicked out or didn’t do anything anyway. I’m so frustrated I could scream! 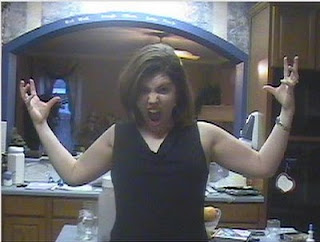 What a way for poor Hubby to spend his 45th birthday. Frustrating Meeting. Then back to his Boring Job (he had a small project, briefly, but now he's back to reading manuals). Major Money Worries (we partially lost a lawsuit in which a former client wanted their money back because she was insane; we have no big clients so no way to pay payroll; back taxes; and we had to refinance the house because we haven't paid either mortgage in forever and they were threatening foreclosure). No Wife (although I did come to bed before midnight for once... and fell asleep while he played video games because for some strange reason he has Insomnia)...
On the bright side, it's better than last year! Last year on his birthday he had to take Kitty to the psych hospital (6 hours of intake waiting with her).
Plus, this year I made him a homemade chocolate birthday cake and gave him a box of Whoppers for his present (kids of course gave him nothing). I cooked him baked "fried" catfish (I rarely make fish because he's one of the few that likes it) and homemade corn bread muffins we didn't eat until 8pm, but it was pretty tasty.
Posted by marythemom at 9:37 AM

Sorry the meeting with the school was so fruitless on top of all your other worries. I am sending you a hug and keeping you in my prayers today.

Hey, is that picture new or am I remembering it? And they can't see that he needs to go back to the small emotionally disturbed class setting he was in before?! The economy is picking up...or so I hear, hope it picks up for you guys quickly. What about something like a forest ranger? Lots of quiet time and you can still boss people around that get off of the trail.

Jeri - I'm assuming you mean the picture of me and not "The Scream!" *grin* Yes, that is a pretty old picture of me (when I still dyed my hair and before I added on all the extra weight - again).

The Assistant principal said, regarding return to the special school, that "once you've proven you can leave successfully" (he's been slowly transitioning out a few classes at a time for over a year), "then there is no returning. It's like a bird leaving the nest." If he'd failed significantly during the transition times that would be a different story. Of course he was still feeling the support up until the end, and it was only when the support went away completely that he had big issues.

Sorry to hear of the worries, praying for positive changes! Hugs!

BTW, Park Ranger sounds like an option. Something for him to focus on?

Stupid people at the school. What kind of rule is that to say, "There is no returning"? Someone needs to be slapped. Can I do it? Please? Okay, okay, I won't. I just wanna. Bear needs help, they know he needs help, and they're sticking their heads in the sand and hoping it'll go away. I say again, Stupid People!

Forest ranger - there are no Kleenex girls in the forest!

Shar - it's an unwritten Stupid People Rule of course!

How incredibly frustrating. I was hoping and praying for more positive results. I'll keep praying for that. :( {{hugs}}

that is such a frustrating situation to be in. I can see why Bear is having so many issues, that is a lot for anyone to sope/deal with.

ugh! i say it a million times, I wish Sissy was dumber! because if she was cognitively impaired, she'd have an IEP and it would be easier with all the school crap. But no. She has to be mentally and emotionally challenged while simultaneously possessing an above average IQ.

So kids like this fall through the cracks educationally and there is nothing we can do about it.