Kitty turned 15 last week. I threw this cake together at the last minute because I had to rewash/ scrub every dish in the house (3+ hours of dishwashing!!) because the water softener apparently wasn't working and when the dishes didn't come clean in the dishwasher the kids would run it again... and again... and again - until the hard water white stuff was "baked on." *sigh* Plus of course cleaning house.
The cakes were decorated after the girls arrived. 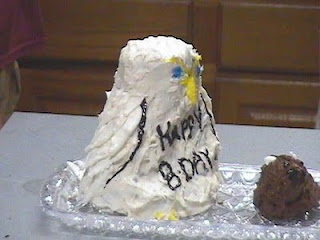 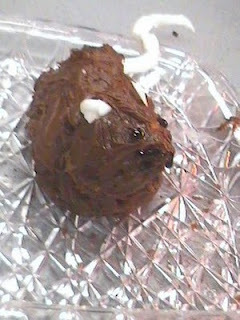 Kitty chose Harry Potter's Hedwig for her cake and I threw in Scabbers from the leftover cake scraps. I made both out of chocolate poundcake (which used up a tiny bit more of the 25lbs of flour I foolishly bought to make the cookies and brownies for confirmation). I used white candy melts to make Hedwig's wing feathers, nose and tail, and Scabbers's ears and tail. I have no idea why Hedwig looks so mad!
I was going to make books for Hedwig to sit on, but that cake didn't cook in time and I didn't have enough icing to make colored book covers (I used all the white on Hedwig) so I just covered the third cake with chocolate - we decided it looked like a coffin. Black candles because that's what Kitty is into.
The cakes were overcooked and parts ended up too hard. Bob tried to eat Scabber's head and it was crunchy, but the kids loved asking for "rat butt."
One of my better looking cakes and I think Kitty did really well at the party! She kept both the girls engaged and involved, and didn't leave them alone once (no playing dolls in the closet this year!). My litle girl is growing up!
Posted by marythemom at 9:46 AM

A successful birthday! You ROCK!

I recognized Hedwig and Scabbers right away! Bravo, another great birthday cake success for your lucky kids.