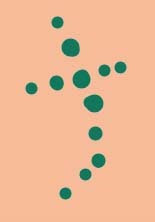 When Bear came to us at age 13 he had 3 homemade tattoos on his arms (he claimed there were more elsewhere on his body, but as far as I can tell this was a lie). According to Bear, his biodad was a tattoo artist which may explain the appeal.

The tattoos were crude and fairly small. On the web between his thumb and first finger of his left hand he had his initials. I don't remember where, but he had 3 dots that he said were the symbol for "my crazy life" (this was small and unrecognizeable and we didn't bother having it removed). And on his left forearm he had a series of dots that looked like they could have been a cross, but trailed off in kind of a hook at the bottom. This picture I made (at the top of this post) kind of resembles my memory of what it looked like. During the first couple of months Bear was with us he got hold of some India ink and sewing needles and darkened the tattoos. (The India ink got EVERYwhere in his room and ruined carpet, furniture, bedding...).

At Bear's suggestion removal of the tattoos was discussed in some of the team meetings. I finally found a place that would remove tattoos for free (for kids under 18), I think it was like $25 for adults. Central Texas Tattoo Removal Project - very professional and all volunteers (doctors were too). When Bear was released from residential treatment it was his idea to go forward with the removals. We never pushed it.

Because his tattoos were homemade, their removal was supposed to be easier and more complete (we were told professional tats require a lot more treatment and will probably never look like "normal" skin despite what they show on laser removal sites). Still they won't look like tats anymore either, and maybe if properly cared for they really would go back to looking like normal skin.

All in all, no one would know he had removed tattoos by looking at them. Boys have scars. Bear's are not really noticeable despite the keloiding.

A lasar is used to burst the skin cells containing the ink/pigment (these cells are below the top layer of skin). Once released this pigment slowly dissolves/ is absorbed by the skin. This whole process takes many months depending on the size and intensity of color of the tat. Frequently the process has to be repeated over a period of months to ensure all the ink is released (it's easy to miss some cells the first time around). It is apparently a little painful, but probably not more than getting the tattoo in the first place. Bear had two rounds of the laser, and probably needed one more, but the spots were miniscule so he decided not to. I think a similar process might be used for wart removal, but that's an assumption based on a scar my sister has.

The skin is treated as though it has been burned. Antibiotic ointment for the first few days, mineral oil sheets (to keep the skin moist), hydrocortisone cream (to reduce swelling), guaze, and pressure bandages are kept on for weeks. If this does not happen (Bear had the most trouble keeping the bandages on his hand) then the area can become a keloid scar which means it has raised scar tissue where the tattoo used to be (although it's not exact so you won't have a perfect outline of the tat or anything). Exposure to sunlight can also cause the scar to darken. If you've seen someone with a scar from a burn you probably get the idea. I found pictures on the internet, but I figure if you want to see them you can google keloid scars for yourself. I have a nastier one on my leg (from cutting it while working my garage sale and not doing anything about it for hours) than anything Bear has from his.

Bear went about 4-5 times over a period of a year (the last few were just to check healing). The staff were always very nice. There were usually interesting people in the lobby. Once we saw two juveniles covered in gang tattoos wearing orange jumpers with manacles and under guard - with as many tattoos as they had they were most likely looking at a serious time committment. Several very young women with babies. A couple of moms like me with their teenager.

An interesting process. Hopefully one that will make Bear think twice about getting more tattoos when he's older.
Posted by marythemom at 12:07 PM

You don't like body art? Done correctly by a professional they're beautiful and often deeply symbolic to the wearer. Tattoos have an ancient and very interesting history going back to the dawn of civilization.
However, it's probably a good idea for Bear to have his removed, especially if they were unattractive and he no longer wanted them.
You might be surprised what kinds of people have tats. They're not just for lowlifes and gang bangers. Quite a few very well educated, affluent people have tattoos, including a certain attorney who reads your blog.

Wow, thanks so much for explaining, very interesting. How cool is it that you were able to use the services of the tattoo removal organization! It's even cooler that you saw the guys in prison attire there b/c it means they were probably leaving their gang ("de-briefing") and wanted their gang tattoos removed.

In case you were curious, Bear was technically correct about the three dots tattoo (in the web of skin between the thumb and index finger). It's called "mi vida loca" ("my crazy life") by gang members. The appropriate nihilistic stance for a gang member, I suppose.

Actually I think what an adult chooses to put on their body is up to them, but I think a person should be old enough/ mature enough to make this permanent decision, especially in such visible locations. It can say a lot about Bear in potential job situations to have homemade "gang" tats in such obvious places.

A lot of my friends have tats, and although it's not for me, it doesn't change how I think of them. Still, I don't think what Bear had was art or even meaningful to him, and seeing some of the gang tats, especially the face and neck tattoos did negatively influence my opinion of the people with them.

Himmm, I will have to check and see if there is an organization around here who will remove tats for a low cost. FS#2 has an home-made tat. It is supposed to be a ribbon, but instead looks like a male body part. Also unfortunately, it is located on his bicep. A kid on his school bus apparentely exclaimed out loud one morning, "You have a p**is on your arm!" I've been debating between having it removed or having it fixed to look like something else.

I have another question if you don't think it's too personal... In your bio on the blog it says you've been married x amount of years and then you have in parenthesis: "to hubby!"

I've always been curious if there's a specific reason you phrased it that way. You don't have to answer if it's too personal of course.

No real reason. Just a way to get his "name" in the bio. Stupid I guess since it's pretty obvious who "Hubby" is... unlike "Bob" or "Kitty."

No worries on the "personal" question - if it bothers me I'll tell you so, but mostly I'm a pretty open book. Drives Hubby crazy.