When Bob was little we had some lovely experiences with childcare. Bob was my "spirited" child, very strong-willed and occasionally aggressive.

(Yes, Mom, I know you think she takes after her mother, but I'm sure
you're mistaken. As I tell my children often, I was the "perfect" child. Never
getting into any trouble, always sweet and innocent... Mom, stop laughing!

As I was saying... any stories Grandma tells about me are greatly 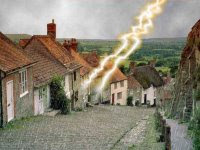 exaggerated if not outright lies...

OK, OK, so some of them are factual. The time I told my little sister that coconuts are alive and kiwis are their babies, I'll admit to that one. But how was I to know that Mom would decide to buy a coconut and start describing how to eat it - "first you hammer a nail into it and pour out the milk, then you crack it open to eat the meat..."


Ok, so I didn't confess when my little sister started screaming. That doesn't make me a bad kid, and it's totally not my fault that Mom decided that we should still try a new fruit and chose kiwis. "First we'll take a knife and peel the skin off..."

And when I put Crisco on the bottom of my feet so I could ice skate on the kitchen linoleum?! That's not really bad... just very imaginative.

Ok, now the time I locked my sister outside and when she tried to
come through the back door with the broken lock I dumped a pot of french fry
grease on her head. That wasn't nice... but at least the grease was cold! And I even have photographic evidence that the time we were playing Indians and I tied her to a tree and danced around her making "Indian" war cries (by patting my open mouth with my hand), that in the first picture she was clearly helping me by holding the rope while I tied it. (Cute pictures evidence by the way, I'll try to find them and scan them in). And the fact that playing Indians is totally non-PC cannot be held against me! Disney made me do it!)

As I was saying, Bob was my "spirited" child, and my first experiences with her in childcare were difficult to say the least. Not because she was horrible and kept getting kicked out, but because she was "perfect"... at least in daycare. At home however was another story!

I finally rationalized decided that her behavior was caused because she trusted me. She spent the time in childcare being "good." So good that the childcare workers always raved about what an angel she was! When she got home she was able to "let her hair down." She could yell, scream, say no, throw temper tantrums and make me wish that this really was just the "terrible twos." (She started the "terrible twos" at 17 months and "finished" at about 4 1/2! I wish I could say that the theory about how the "twos" goes predicts how the "teens" will go was wrong, but so far it's mostly accurate. *sigh*).

I worried that people would think I was insane, because I was often saying how much trouble she was giving me at home when all evidence at school was to the contrary. "Luckily, " she did show this side of her to more than just me. When she was 17 months she got us kicked out of a playgroup that I STARTED, because she was being so aggressive.


I look back now and realize this was another of God's ways of preparing me for dealing with my children now. Or maybe it's just that Mother's Curse, "I hope someday you get a daughter just like you!"
Posted by marythemom at 11:19 PM

My sister and I always say we have each other's child. She laughs because she was the "spirited" child and I was more laid back. Her daughter is the same, mellow and adorable. Mine is aborable too but nowhere near mellow!

Oh you are so not bad....bad is when you dump out your little brother's bottle and don't fess up that he's hungry...repeatedly. Bad is when you latch down the corners of his crib blanket with him under it. Or you feed him ExLax and tell him it's chocolate. But hey, in my defense, I was told that the hospital bills in my name were so high that my parents were going to have to give me to the hospital...or that purple stickers (grass burrs) were poisonous....and forced to play Roller Derby with my older brother every Friday when my parents went out. And yeah, if you read my boy blog: http://withlovefromsumy.blogspot.com/ you'll know the mother curse works!

But did you ever pull the Christmas tree over and flood the bathroom and kitchen all in the same day?

The mother's curse comes back to haunt me all the time... only revenge is to curse it onto my own kids.