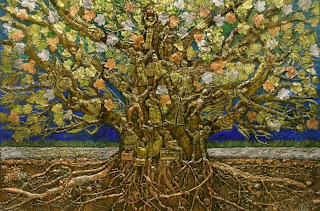 So I told you about how I discovered that the series of coincidences (Godincidences - since I believe they were all part of God's plan) that led to our adopting Kitty and Bear wasn't really the whole story. After attending a meeting of a faith-based women's support group I realized that my whole life has been about God supporting me in this journey to develop and grow in my faith and building trust.

What started as looking at a single thread (the adoptions), helped me realize that it wasn't about one thread at all, or even about giving me tools to help my kids. It was bigger than that.

Today I had lunch with an amazing woman who introduced me to the support group in the first place. We've only known each other a short time, but she's been pretty influential in my life. She has been a source of encouragement (see this post) and a role model to me. We've had lunch several times and today she commented on how much better/ happier/ more content I seem now.

I began thinking about whether or not my life is easier since I met her (it's not);


whether or not my children are better behaved or closer to "normal" (nope, that's not it!);


whether or not I have been attending fewer activities, doctor's appointments, meetings, therapy session (nuh uh)


whether or not I was taking better care of myself, getting more sleep, eating better, exercising (I admit it, I have no self control so that's not it)


whether or not our financial situation has improved (if anything we're much worse off now then we were then)...


but when I thought about it I realized she was right. I do feel better, more content, and less stressed.

I could just say this is because I'm on better meds (I've made some major changes in the last 6 months), but I know that's not really it.

I think it's because I'm following the path God is setting for me.

All my life I've had friends / family/ people who've been influential in my life. Sometimes for the worse, but most of the time for the better. Most of these people were in my life for just a short time, but I took something away from the relationship that hopefully made me a better person, more on that in another post.

God has been weaving the tapestry of my life to not only help my kids, or just deal with my attachment issues but to become a happier person with a close relationship with God and hopefully to touch other's lives in a way that helps them find the same.

Posted by marythemom at 2:43 PM