Yesterday I was sitting in attachment therapy with Kitty and we started talking about her adoption story. I know a lot of people tell their kids this story all the time, but it feels awkward to me since my kids weren't young when they came to live with us and they know their birth stories. Not to say she hasn't heard the story before, but she doesn't know it by heart or anything.

That got me to thinking about all the little family stories that we don't even think about. The "in jokes." The little things that might have made us crazy at the time, but in a lot of ways make us love them anymore.

The Name Game
Kitty's adopted name is actually one of those stories. When my mom and dad were thinking of names for me one of the names Dad suggested was "Kitty" (not really, but use your imagination). My mom really liked the name and it would have been mine, but my mom asked what made my dad think of it. Apparently it was the name of a bar maid he'd met while on TDY (temporary leave) in a different state from where Mom was. I don't know what Mom suspected, but it did not become my name. I liked the name and when Hubby and I were discussing girl names for Bob (yes, in real life she has a girl name!), it was one we considered, but her initials would be unfortunate so we picked a different name. Bob also knew this family story and had taken to naming her dolls "Kitty," so when Kitty decided to choose a new adoptive name she picked "Kitty" (and she liked the unfortunate initials). 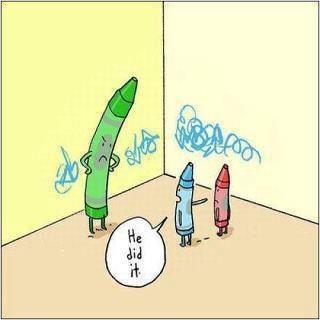 One of my favorites is the "He bit himself" story. Bob was rough on Ponito when he was little. She was 3 and did not want a brother, and he was very easy-going and let her pick on him without retaliation. Bob was going through a biting phase and had even bitten herself and tried to blame it on him. Of course her teeth were much bigger and we told her we didn't believe her and that we knew she'd bitten herself (we didn't discover until year later not to tell her how we knew what she'd done - because she learned from her mistakes and became a better liar!). Anyway, soon after he came up with a bite mark, and she confidently told us she hadn't done it. That he'd bitten himself... The Bite Was On His Cheek!

This beat the time she got caught coloring on the walls, and told us little brother Ponito had done it.  We told her we knew she'd done it, because she'd written her name.  So not too long after when she wrote on the couch with a marker, we told her again, we knew she'd done it because even though it was Ponito's name on the couch he was only 1!  She'd tried to teach little brother how to write his name, but it hadn't worked..

Kitty told the therapist and I one of her family stories that didn't actually involve any abuse (at first). Apparently Biomom told Kitty that while she was pregnant with Kitty, that every time she started to smoke, Kitty the fetus, made her throw up. Kitty then told us how she continued to hate Biomom's smoking after Kitty was born too. She talked about a time when she was in second or third grade that she locked Biomom out of the house because she was smoking. The second story obviously triggered some trauma for Kitty and she dissociated from the conversation until we were able to change the direction of the conversation.

No really, it's a Healthy Snack! 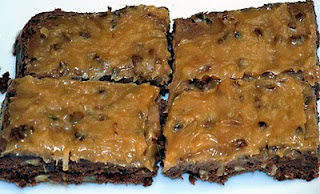 We have almost no cute family stories for Bear. So Monday I really appreciated it when he finally created a new one! On his way out the door to the bus, I noticed that Bear was holding what looked to be a peanut butter jar (taking the whole jar to school for a snack is of course not acceptable). Then it clicked. For Kitty's family party she'd requested German Chocolate Cake with Coconut Pecan icing... YUM! The'd had about a cup and a half of icing left over so I'd decided to bring it home and ice some brownies with it for dessert on Kitty's actual birthday on Tuesday. The jar of icing was what Bear was carrying out the door. I told him no way could he take icing to school for a snack. He said it was pecans and stuff so it was healthy! Say what?!! I said it is ICING, that means it is sugar and butter with a little bit of nuts thrown in. He started to argue with me, but I cut him off and told him to put it back. My friend witnessed the whole thing and she totally backed me up on the icing vs nutritious nutty snack thing. Don't know if that's why he didn't argue to much. He grabbed an old jar of stale soybeans?! and stormed out. We politely waited until his bus pulled away from the curb to laugh our heads off!

Got any cute "family stories" about your adopted kids?
Posted by marythemom at 2:46 PM

Here's one that sometimes I think is cute, but also sad because it shows how "on her own" she thinks she is:

We were out shopping one day. As we walked past a bridal shop, my RAD daughter (6) observed, "Those dresses are sooooo pretty! I'm going to buy myself one someday." My son, ever the realist, stepped in, "They're really expensive." My daughter thought a moment and said, "Well, I'm gonna have to start losing a lot more teeth, then!" At her toothfairy's rate of $1/tooth . . .