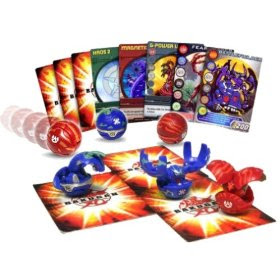 Ponito's birthday party went well. I guess I'd never realized the dynamics created by the little neighbor boy who is so aggressive -until he wasn't here. Even Ponito's sweet, quiet cousin got to play and had fun - he even decided to spend the night. (Bear's girlfriend broke up with him so that issue is resoved as well).

Ponito was excited to get mostly Bakugan balls for his birthday. This is apparently the latest craze among elementary age boys (maybe older too). Here's what they look like - Bakugan Battle This is not my kiddos, but it does show how the toys work.

They are little plastic balls that have a magnetic spot on them.

When the spot touches metal (like the special playing cards they come with), they open up and show their point value and turn into little creatures (like Transformers only the balls do it on their own). Each playing card they land on has a list of bonus points (based on the colors of the balls I think) on the other side. The playing cards are layed out face down into an "arena." The boys take turns rolling their Bakugans trying to land on the same card as another ball so they can "battle." When two rolled balls land on the same card they have a "battle." The playing card is flipped and the boys have to do math!! They take the value of the ball plus the value of the points added by the playing card. The one with the highest points "wins" and keeps his Bakugan on the board. It's kind of like marbles except you don't get to keep the other kid's marble (at least not the way these kids played).
So now you know everything I know about Bakugan balls! Don't you feel enriched?!
Posted by marythemom at 8:06 AM