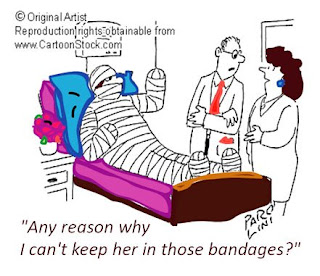 When we first got Bear and Kitty we were warned that Kitty would be the harder one to get through to. This seemed crazy because Bear was a seething pit of anger, while Kitty seemed fairly compliant.

Their old therapist said that while Kitty kept everything inside, Bear wore his emotions on his sleeve. You knew when he was upset, scared, angry or anxious (because he would be visibly seething or actively erupting – he didn’t really have a broad range of expression). Normally Bear stuffed all his emotions (anger, fear… even happiness) in a locked box deep inside him. This would work for about 3-4 weeks and then the box would get full and have to explode - like a volcano. He would spew lava everywhere, with no ability to be concerned for who got burned (including himself). After an eruption, the box would be open for about 10-15 minutes and you could view his tender emotions. We had many heart to hearts with him sobbing, telling us how afraid he was and how hard it was to trust. He was miserable, and hated being out of control.

When Bear got on the right medications (with the right diagnoses), the volcano inside him disappeared! It’s been a year now, and I’m just now believing that it really is gone. He’s still a mess (with the childhood he had how could he not be?!), but he has control over his emotions. Sometimes I worry that he is still stuffing his emotions in that box, it is just stronger now and can hold more. His therapist thinks that he is just getting more mature and does not need to drag out and process all the bad stuff in his past. I worry that it is festering inside him, but I have no real way to access it and probe to see if it is truly healing.

So here’s the gross analogy. My apologies, but it does seem accurate and I can’t think of a better one.

When we got Bear he was an angry, festering wound – raw, infected and oozing on everything he touched.

Kitty appeared healthier because you couldn’t see her wound. It was scabbed over and covered with numbing, self-protecting bandages, but it was still festering and infected inside of her – contaminating her life and her relationships.

With treatment, using the right medications and therapy, Bear’s wound is slowly healing. It will leave scars, but he finally has a good prognosis.

We have not found the right treatment yet for Kitty. Most of our efforts don’t even come close to penetrating her protective bandages. We are seeing the wound and its effects through cracks and I cringe at the devastation and damage that emerges. I am sooo tempted to allow her to close up and keep everyone at bay as is her preference. I wish I could just deny the bandaged and wounded parts and embrace my child, but it is really all or nothing. She has a thin façade that she presents to the world (and even herself), and it requires all her energy to keep her walls up. Until the defensive walls/ bandages are removed – Kitty can’t feel anything. She can’t love or attach. She can’t process and heal.

I am terrified of the road ahead, but I know God will give me/us the strength to get through this. We deserve a chance.


" Life isn't about how to survive the storm, but how to dance in the rain."
Posted by marythemom at 10:33 AM

That is not gross at all. It is right on the money. Nice job on the analogy.