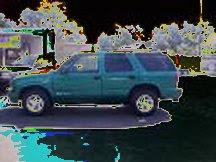 Tried a new therapy technique with Kitty today. No EMDR therapy for her! Hubby and I went instead, and she was told she's not going to be allowed to go. The therapist is hoping that she'll feel like she's missing out, and start wanting to go. I'm not holding my breath on that one. Might work on Bear who can't stand other people talking about him, but doubt Kitty will care.

Got several calls from home during the therapy session. Kitty had a low grade fever and was complaining that her side hurt. Rather than listen to her whine and complain all night, I told Grandma to tell her no worries, she could stay home with me and eat leftovers while everyone else went out to dinner as planned. She started wailing and sobbing. Bear and Bob begged me to let her go. Wish I thought it was because they wanted to help her, but I suspect it was because they didn't want to listen to her. I said she could only go if she was healthy and not complaining, and then the miracle occurred! She was HEALED! She stopped crying and started laughing.

We were late to the buffet restaurant and by the time I got there, Kitty had already gorged herself. She did come running up to hug me, and bad mommy that I am, I told her I didn't want one because her face and hands were coated with ranch dressing (she likes a sprinkle of salad on her dressing). She promised to be careful and I got a hug, luckily I wasn't dry clean only today because her shirt was coated too. *sigh*

I don't know what to do about Kitty's recent gorging. She'd had a plate of ranch dressing with a little salad, 4 pieces of pizza, a plate of fried popcorn shrimp, and at least 2 rolls, that I know of before I got there. I watched her slam down 4-5 glasses of water because she "hadn't drunk anything all day." I finally told her she could have more, but she was done with carbs and protein. She needed veggies! She got a serving of sweet potatoes with marshmallow, a small piece of pineapple (which she decided tasted awful - I'd had some and it tasted fine) and a piece of watermelon. She was ready to go back for more pizza, nachos, and some sausage, but I told her she was done.

She started begging for dessert. Rather than tell her no, we asked what she'd eaten today - trying to show her how unbalanced her diet was (we've talked to her before about how dissociated she is from her body). She'd apparently forgotten to put her main lunch (a can of soup) in her lunch bag. Hubby had made sure she'd taken her lunch bag (she often forgets), but of course didn't realize it was empty. A teacher gave her some lunch money (we've asked the school to call us, but she doesn't always tell them because she wants to eat what her friends have - yesterday lunch was a mooched bag of chips, because she'd forgotten her lunch again). Today's lunch was a sandwich and a doughnut.

I told her she could have a dessert, but it needed to be no larger than a ping pong ball (I demonstrated with my hands). She had a minor meltdown, and ended up arguing so long that she never actually got a dessert. This infuriated her!

We borrowed Grandma's car because Hubby is teaching scuba this weekend, and needed to be at the dive shop super early. Bob wanted to ride with me, but I didn't want Kitty riding with Hubby, and Bob decided to ride with Hubby rather than go with Kitty and I.

Kitty lit into me about what a bad parent I am, and how mean I was to her. I decided I was going to stay and work on this rather than drive home. Kitty threatened to get out of the car so I engaged the child safety locks. Kitty had rolled down the window and was holding the car door locked - making this difficult. She managed to disengage the child safety locks before I could even get back in the car. *sigh* When she threatened again I just told her this was a bad part of town (true) and that I didn't recommend that choice.

I wish I could say the right words came to me, but they didn't. Kitty wailed about how horrible and mean we are and that we are not her real family. She wanted to go back to Nebraska. I sympathized that family's are scary to a person with her past, but of course she claimed she's not scared of us, she just hates us.

I reminded her that she had no way to get to Nebraska. She mentioned she could steal my car and drive - I poked holes in that option. She kicked the chair and yelled at me, but didn't escalate out of control. I hate that I can tell her over and over that I love her, but she doesn't believe me. Doesn't want to believe me. She just wants to make it all go away, and that tears at my heart - but wishing won't make it happen. I also wish I could just make it all go away too. I wish I could just open her heart, set it to Trust and Love, and just wait to hear those words I've been longing to hear from Kitty, "I love you, Mom. I love being part of this family." I know I may never hear them, but Kitty is not the only one who has a dream.

We talked about eating (she hated me for telling her what to eat, and she was going to starve herself skinny so she wouldn't be like biomom. School has been showing plays about bulimia so she's talked about that a lot (thanks public school!) - she's hoping it will get her put in the hospital to get away from us.

It was a long convoluted argument with many rabbit holes. I think 2 things might have gotten through.

One, I got a chance to say, I wish I'd always been her mom, because I wish I could have kept her safe (had evil step-father thrown in jail the first time he EVER tried to hurt MY child).

The half brother of one of Kitty's half sisters died when he was only 16. Lately Kitty has been obsessed with him (he died violently and was good to Kitty when he was alive). She told me that in some of her many walks around the back yard talking to herself that she is often talking to him. I told her I do that too, but I'm talking to God. She said this boy watches over her, but she doesn't know why he sent her to this horrible family (us). I agreed that sometimes I wish I could ask God why he does things. I gave her some examples of times when God did something and at the time I had no idea why, but later, sometimes years later, I figured out why and it was always part of his great plan. I mentioned that if this boy is watching over her then he must be like a guardian angel. Guardian angels talk to God. What if the Guardian angel boy told God, my friend is hurting and needs a family, and God chose us for her because he knew I needed her to be my little girl? That seemed to resonate within her.

Then I reminded her that the boy was NOT blood related and yet she still loved him!

So in a way she got therapy after all. Almost an hour in the parking lot and about 15 minutes driving home, but I pray that it was worth it. I do not expect instant, forever changes, but maybe a couple of chinks in her armor?
Posted by marythemom at 9:57 PM

Email ThisBlogThis!Share to TwitterShare to FacebookShare to Pinterest
Labels: therapy

You are amazing! What a tiring day, and yet you handle it all with such grace and patience.