Some of the other Mommy blogs out there are posting "labor day" stories so I thought I'd try it too. I've given birth to two children and adopted two children, and have many children out there that I feel like should be mine, but didn't end up that way.

Bob (don't Hubby and I look kind of evil in this picture?)- A little over fourteen years ago, in the middle of a TX summer, I went into labor with Bob. I'd gained 70lbs, most of which was water weight, and weighed over 200lbs. I was miserable.
I was on a major nesting/sewing kick and was making myself a pair of beautiful pajamas to wear in the hospital (Why wear those ugly things made out of cheap sheet material? Answer: Because you don't want to ruin anything nice with body fluids!). I was having trouble with it so I decided to stay up until 4am to work on it (never did finish it!). I finally gave up and went to bed, and of course I work up almost immediately in labor. By the time I gave birth 14 hours later I hadn't slept in almost 48 hours.


The pains were less than 5 minutes apart, but merely uncomfortable and I hadn't dilated much so they were about to send me home, but when the nurse was checking my dilation, she broke my water. So I stayed. Several hours later they gave me Pitocin since I still wasn't in full labor. The epidural was incredibly painful to administer (the anesthetician asked if I'd had any back injuries), but it did eventually take effect. At one point the bladder on the automatic blood pressure cuff slipped loose and it kept tightening and tightening until we finally managed to rip it off. The bruises were very colorful. Those cuffs still make me nervous (which probably messes with my blood pressure!).


Bob hadn't been cooperative during the ultrasound so I was delighted to discover she was a girl (which is what I secretly wanted).

I lost 20lbs in the hospital (water weight) and another 30lbs in the first 3 weeks, but I couldn't lose the last 10lbs. I blame it on the fact that I was nursing. 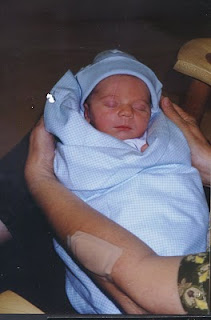 Ponito (look at that nose! All the nurses and even the doctor commented on it. I was afraid it would be huge, but it's totally normal now - well, except for where he broke it on his second birthday!) - Gained 70lbs again, but this time it wasn't all water weight!! I woke up in the middle of the night in labor and we dropped Bob off at Grandma's and headed to the hospital.

I got an epidural as soon as they would let me (not soon enough). I had decided not to get an episiotomy this time, so of course I had horrible tears, that got infected. Labor was only 7 hours, and everything was relatively uneventful... until it came time to circumcise little Ponito - let's just say they "nicked" him.

I felt sorry for the hospital because I was stuck waiting while they observed Ponito's "little boy part" for another 24 hours before we went straight to the pediatric urologist, so I got bored and really slammed them on the exit survey. Ended up biting myself in the butt through - they made me stay and explain all my complaints.


Kitty and Bear (I still can't believe Bear is only 12 in this picture! Kitty is 11 here) - You heard how the labor started on Labor day weekend. It got more painful for the next 2 months. We weren't allowed to tell the kids that we were going to adopt them until the ICPC was done, and that took 2 months!

We wanted to keep in touch though so we were allowed to call the kids weekly. Awkward! Imagine talking to kids who are not very social, and you're not allowed to tell them that you're going to be their parents. They both figured it out though and then they got into trouble as the anticipation and stress got to them.

Hubby and I flew to Nebraska, and rented a car to get to the small town where Bear was living (they brought Kitty to us there since she was in a distant rural area). Bear had been hunting with his foster dad and didn't really want to go with us. Kitty was totally hyper and fairly annoying. She kept poking Bear who had been "escaping" by sleeping and was sleeping in the car the whole way to the hotel we'd be staying in before catching our flight home to TX.

As we unloaded the rental car I dropped and broke a special snow globe given to Kitty by her biomom. *sigh* The kids had never been in an airplane before and Hubby and I hadn't been in a really long time, so I'd worn boots with laces (a real pain to get on and off), and Bear had put all his cologne in his carry on bag (he told them to just throw them away since they were bigger than the 2 oz. or whatever it is you're only allowed to have on a plane).

We had a layover in Colorado so my Dad and stepmom (parents of my new little brother) and my cool step sister (who placed 11th in the world in a triathalon a few years ago) all got to meet the kids and give them presents (we knew nothing about making the kids' world small at first while we did all the attachment stuff). Then we finally came home and the journey began.

My nieces and nephew (pictured here at age 8, 10, Bob at age 5, nephew age 11 and Ponito age 1 1/2). - From the time my nieces and nephew were little, their mom (my ex-sister in law) was a mess, and it was pretty much a given that she was going to lose custody any day (she would lose custody, take a few parenting classes, and then get them back, lather, rinse, repeat). Hubby's brother wasn't much better, and was nowhere near ready to handle kids ages 3, 2 and newborn. Hubby and I were happily married and I had cared for my nephew for 6 weeks when he was almost 3 (and fell in love with the kid - I can't believe he's 19 now and engaged to be married!). we talked of nothing else for over a year, even moved up the time we planned to try to get pregnant so I wouldn't have a newborn when she finally lost custody for good. Unfortunately all the people who were telling us all the horror stories about what was going on with the kids never reported them to the police or caseworkers, and she didn't officially lose custody for almost ten more years at which point we were no longer an option. So technically this is not a "labor" story, but it hurt a lot.
Posted by marythemom at 5:50 PM