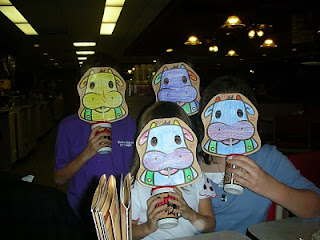 Tuesday Kitty threw up twice on the way to the school bus, but wanted to go anyway. Luckily Bob borrowed a cell phone and called me so I told Kitty to come home. It seemed like a cold, but she has been complaining of trouble with ear blockage and a little pain for over a year and I wanted to get it checked out yet again (we now have a referral for an ENT). Apparently she has congestion from allergies and a little virus - no fever. We treated the congestion and she went back to school the next day.

Wednesday I got a call from the school nurse office (Kitty goes daily so I wasn't surprised), but apparently I'd missed Kitty's call (my cell phone doesn't work well in the house), and this was Bob. She felt bad and wanted me to come pick her up. Similar symptoms, headache, sore throat, sniffles and a nasty cough.

Hubby has been complaining of a really itchy spot on his left shoulder blade going around to under his left pec. He assumed it was a reaction to the Niacin, but that didn't seem right. When he broke out in a rash under his pec we thought maybe it was allergic reaction. He is extremely sensitive to chemicals and when he teaches scuba in the pool he always breaks out in a rash, but this didn't quite match. We thought maybe he was allergic to a new laundry detergent.

Hubby sent me this e-mail.


Could this be shingles?

He went to the doctor, but the rash wasn't showing. The doctor said it was too early to tell for sure, but prescribed an anti-viral. He talked to Hubby about the leg pain. The doctor said it's too early to tell, but since Hubby has a family history of it, he will recommend some testing, including cholesterol. Of course he said Hubby needs to lose some weight, and work out on the treadmill. I think he reassured Hubby that he was not going to die (well, any time soon).

He is of course overly stressed, but I doubt there's anything I can do to fix that for him. Our life is just incredibly stressful, and he struggles to "accept the things he cannot change." (I admit it's hard for me too). He is of course depressed too, but we could never convince him to take meds, and he's too private to to to counseling (although he's been willing to speak in my counseling sessions).

Today - Ponito didn't feel well enough to go to school. It was pretty much a miraculous recovery once i told him he didn't have to go to school, but we took it easy all day... well into the fireworks started, but that's another post.

The good news is that's pretty much everybody. Bear rarely gets sick and neither do I (over 20 years working in child care), plus this is one of those mild viruses that we could fairly easily ignore. None of the rest of us are showing symptoms either.

Sorry to hear that everyone is feeling yucky! Shingles are NO fun. My hubby got them while still in his 30s so we didn't put two and two together until it was too late for the anti-viral meds. Thankfully his case was short lived.

Even though you're not sick, take care of yourself. :)

And don't forget that you can catch the chicken pox from shingles (well, probably not you, but anyone else in your house that didn't have them yet or only had a mild case.)

I've had shingles 2 or 3 times now so that's why I was so surprised at myself for not immediately thinking of them.

The good news is that everyone here has had it or been immunized.