Last therapy session, I told Bear he had to bring his journal where he'd been writing his "check ups." Check up was supposed to be writing down a feeling he had felt that day and writing down whom he'd asked for help and the results, then talking to a parent about it, but Bear hadn't been doing that. He'd written down his feelings, but not the rest and he hadn't talked to us about it at all.

He took his journal to therapy and read the one sentence he'd written per day about his feelings. It was mostly about a girl, but that wasn't the point. He talked about his feelings and I suddenly felt more sympathetic toward him. In a way I haven't in a long time. We've told him over and over that talking about what goes on in his head is the only way for us to know if he's making any progress. If he wants us to make any changes he has to prove he is making changes.

These warm fuzzy feelings lasted through him asking to go to a party at the house of an 8th grade girl he claims he doesn't like (and told me he cried last time he was at her house helping her dad with yard work. She's the unofficial photographer of the Horseman school team he is on), and pouting/ brooding when he was told no.

They didn't last through him closing back up for the rest of the week.

I plan to point this out in therapy tomorrow. 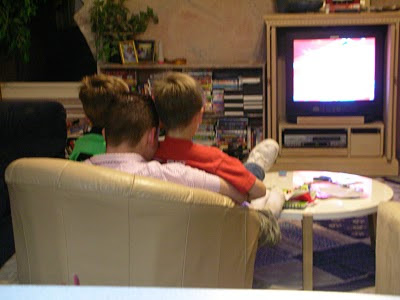 Posted by marythemom at 5:28 PM

Bear seems like he really likes little kids, it's cute.