Take care of yourself first 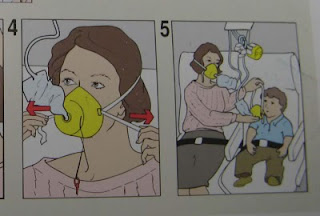 I've been having trouble getting out of the house every day. I get dressed for work, then sit down and start checking my e-mail and Google reader. Next thing I know it's noon. I can do all my work from home except meet with clients and check in with our sales guy. Neither of which is necessary daily (we have maybe one client in a week and the sales guy is very independent), but Hubby wants me to go in daily and focus on a big sales push (which is so the opposite of what I want to do).

Today I was home all day with a whiny, kind of sick, but not really sick child (Kitty has allergies with a touch of a virus according to the doctor - no fever, but she threw up while walking to the school bus. She had to be ordered home after Bob "tattled" on her, because she really wanted to go to school).

Bear came home from school in his usual cranky mood and proceeded to flop down on the couch and start verbally poking everyone.


Then he got on the phone. After 20 minutes on the phone I told him it was time to get off (family rule is 10 minutes). He ignored me. The phone is on the wall in the kitchen and the kids usually sit on a stool at the bar 3 feet away to talk on it. No big deal, but anyone passing by has to lift the cord to get past or they get "clotheslined." I had to pass by several times as I started dinner. He complained that I was "trying to take his head off," because the cord rubbed on his neck every time I lifted it. I responded that he wasn't supposed to be on the phone anyway. I didn't say this a "sweetness and light" tone, but I didn't yell at him either. He muttered under his breath. I walked away.

10 minutes and 2 reminders later he was still on the phone, without his chores done. Finally he got off the phone and came into the room where most of us were sitting which was on his chore list to neaten today. He looked around and stated that everyone needed to pick up their stuff. I told him he could do it (everyone has to pick up other's stuff and wash other people's dishes...). So he huffed and puffed and muttered, and started tossing things at people - most of which didn't belong to them. Then he tried to leave. I called him back and pointed out what still needed to be done (including vacuuming - "I did that a few days ago." "Do it again."). I called him on the muttering. He growled. We both ended up speaking in "irritated" tones to each other.

I redirected him. Repeatedly. He got more and more irritated. I got more and more irritated. He barked at me. I fussed at him. He accused me of wanting him to be perfect. I told him I just wanted him to do a better job. He accused me of thinking he was stupid. I told him if he couldn't figure out what needed to be done then it was my job to tell him what to do. Finally he got it to the point where I could stand to look at it, and I ignored the rest.

Then he walked into the kitchen and asked me to make something special for dinner?!!!

I want to be that happy, slightly manic person again. The one who loved to decorate and give advice. The one who sang when she was in the house alone (Ok, all the rest of the time too). The one who loved to bake and make Halloween costumes. My online friends even gave it a name - MTM Syndrome (MTM=Marythemom). When someone took on multiple projects and did too much they were described as having MTM Syndrome. Now I can't even get my big patootie off the couch to make dinner. I feel like I'm on simmer all the time.

Half an hour later Bear asked if he could have back some of the candy that he'd given me yesterday (he said he'd given me almost all of it). I semi-jokingly called him an "Indian Giver" (there needs to be a better name for this) and told him they were upstairs. He got offended by my "racial comment" and muttered something along the lines of, "if you're going to be like that, then I don't want them anyway," then stormed off to his room.

Hubby finally got home and took over. He got Bear back off the phone and eventually got Bear focused on getting his chores done. Bear tried to lie and say he was done with his chores (when he'd never even started most of them). When confronted by Hubby he was a little confrontational, but did them without too much argument.

At one point Bear threatened to leave again. I wouldn't chase him.
Posted by marythemom at 6:19 PM

Yes, it is Bear. But it is also you, Ms Bipolar on the downswing. He didn't make you be like this -- he just makes it easier to stay like it.

Did you stop doing the aerobics when the summer ended?

Those statements totally describe me!

How oh how do you get past it?! Since we're only fostering right now we've discussed that this may be our only placement. Granted, the girls could be with us for a very long, long time. But it feels so depressing to live under that kind of attack all day long. And given a choice, I'm not sure I could choose this again.

I'm trying to get myself set up for counseling so I can try to stay on top of my own mental health.

Yes, we stopped doing aerobics when Summer ended. I couldn't keep up being the drill instructor. Yes, I've been on a downswing. Things seem a little more hopeful (gotta love hormones).

Lynn - I waited to answer this until I was in a little better place emotionally. I get through this by focusing on getting what I need emotionally from somewhere other than my son. When my "love tank" is low he has a lot more negative influence on me.

It's not "too late" for your girls, they're still young and impressionable. Kitty came to us with horrid RAD behavior but now she is attached to me. She's not perfect, but she actually "gives back." I think we can withstand a lot if we see a light at the end of the tunnel.

I don't see that with Bear. He has stopped trying to attach. He is actively fighting it in fact. I don't see that we have a lot of options beyond just waiting it out and I have to admit that not having any control over this is depressing and draining.