In case I didn't mention it, I decided to let the kids go trick or treating after all. I had told the kids that I wasn't going to allow trick or treating this year, but at the last minute changed my mind. I'm really glad I did it this way too! We spent no money on costumes, I got to be a hero for letting them go, and they all were so happy to get to go at all that they didn't complain about the fact that we went as a family so I didn't have to worry about them getting into trouble with their friends.

I used to love costumes so I have tons of random stuff the kids got to pick through. 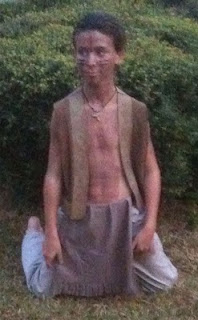 Ponito (11) wanted to go as a Native American (he really is part NA so it's not racist). I "painted" him with some liquid eye shadow I didn't like, to tan up his pale brown skin (you can see where we stopped under his vest)- even gave him some fake abs *grin* put an old suede vest of my mom on him. Had some braids that came off a cheap wig from years ago that we ponytailed into his short hair cut (which we slicked back so it looked darker and like the braids were his), tied on a broken shark tooth necklace I found in a drawer, had him put on his church khakis and belted on over his pants a faux suede loincloth made of a fabric scrap with a fringe cut into it. He went barefoot and shirtless (It's still in the 80s here in TX!).


Bob(14) tried on a bunch of my evening wear (WAAYYY too sexy on her curvy body and impossibly long legs!) and ended up in her own clothes (still too sexy, but covered more). We finally decided her costume was that she would be a contestant on America's Next Top Model. So I did her makeup and hair (which she hated because it took forever and she realized she could never really be a model because she couldn't sit still that long). She wore a pair of my 4 inch heels (don't know how she squeezed her foot in them), which made her over 6'3"! She looked gorgeous, but not too sexy. Did I mention I'm 5'7" in my bare feet?! My "baby" makes me feel tiny! I dressed as Taxi Mom. I wore my new Taxi costume hat (I found at Blue Hanger Goodwill and have been wearing a lot lately), my "mom" jeans, and carried my van keys.


Kitty (15) tried on all of my clothes too, but finally settled on a UT cheerleading costume. Not her first choice, but her boyfriend (almost 18!!) said he liked it. Yes, she just got a boyfriend who is a senior in high school - she's a freshman. I hate it, but figure if I say no, he becomes forbidden fruit. So I say yes, but she is ALWAYS completely chaperoned. He's met her at a football game (Hubby sat 5 rows away), gone to Sunday school with her, and now gone trick or treating with us. He's pretty quiet and very respectful. He tolerated Bear's teasing, and played chess with Ponito while he waited for us to get ready for Trick or Treating. He even let Bear put silver face makeup on him when I told him he couldn't go with us if he wasn't in costume.


BRAAIIIINNNZZZ!
Bear(17) wore his regular clothes (he's really into cowboy right now), but we decided to make him a "Zombie Cowboy." I painted his face and neck with one of my facial masks which is a pale green color. I was surprised he let me put it on him. I think that's the closest/longest he's let me touch him. Here he is searching for the brains of my close friend and neighbor (Sharon if you don't want your picture here let me know and I'll replace it).


Hubby stayed home and handed out Swedish fish from a huge sample case that was given to our company. The only thing that cost money was the pizza and $1 for the Redbox movie we watched when we got home from trick or treating (How to Train Your Dragon - very cute). We had a good time and I'm glad I changed my mind.
Posted by marythemom at 11:12 PM

Email ThisBlogThis!Share to TwitterShare to FacebookShare to Pinterest
Labels: Halloween

That sounds like so much fun! Around here, kids usually stop trick or treating when they start high school. They do, however, occasionally deign to accompany a friend who has a younger sibling or, in the case of my two college guys, they go to parties on campus. To-ga! To-ga! To-ga!
I miss being in college.
Bear would have liked the zombie Walk on the Asbury park (NJ) Boardwalk. Thousands of people go dressed a s zombies. This year they tried to make the Guinness Book of World records for the most zombies gathered in one place.I don't know if they succeeded or not.