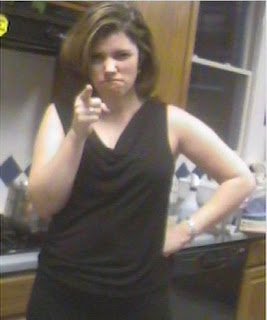 I can be a big weenie when it comes to telling the kids "No" about things I know will cause an emotional response. It's why I will never actually win the Meanest Mom in the World title - although I've been nominated many times. Just call me Susan Lucci!

Recently Kitty has been asking to talk to birthmom. She thinks she's ready. After several months of EMDR I have to admit she's actually been able to talk about biomom without major meltdowns; however I do not really want to allow this.

We do not have any kind of open adoption agreement with biomom. The children were not removed from her care (although there was definitely abuse and neglect) so there are no criminal reasons we can cite. When we first got the children we were told by their therapist (who'd been with them since before biomom voluntarily terminated parental rights - TPR) to keep the kids away from biomom. She stated that biomom continued to blame the children for the TPR and said inappropriate emotionally damaging things to the children. It took us over a year to convince Kitty that the reason she went into foster care had nothing to do with her throwing a chair or being out of control and in fact was NOT her fault.

Because of the black and white thinking of my children they do not have a realistic picture of biomom. Bear hates her - with a passion - and doesn't want her near him or even to know anything about him. Kitty however has never really understood adoption or what happened. In her eyes she had a great life, no rules, no discipline, and she "doesn't remember" any abuse (although she mentions it in passing sometimes). She originally blamed her temper tantrums for getting her into foster care, but now that we've helped her remove the self-blame, she seems to have no understanding of how she came to be there. It was stated in her bio on the internet that she was open to the idea of adoption, but didn't understand why she needed an new mom when she already had one.

I know Kitty would walk right back into biomom's life without questions. I think that's why I don't want her to talk to biomom -who insists that she gave up the children only because she couldn't get the services they needed, and she needed to protect the younger children. Of course she is right. Even when I got them, 1 1/2 years of foster care later, the chidren were very damaged. They were a danger to themselves and others.

TWO MAJOR differences though - While I almost returned the children to foster care because of their behavior I did NOT (admittedly I had access to more support and services). But the biggest difference - I didn't make them this way!

Biomom is still insisting that she did what was best for the children and that she still loves them dearly and misses them every day. In almost every e-mail she talked to me as though I was the children's foster mother. In May, when she found out her last baby was a girl she expressed disappointment that she wasn't able to give Bear a little brother. That was the final straw for me. I told her that I had given my son Bear a little brother, and they loved each other very much. I didn't hear from Biomom again until she sent an announcement that the baby was born (in September) and I haven't heard from her since.

So now Kitty, who every time she gets upset still tells me she wants to go "Home" to Nebraska and biomom, is wanting to talk to biomom again. She hasn't talked to biomom in 3.5 years. She just wants to hear her voice and ask how she's doing. I refuse to criticize bioparents - I know how important that is (my mom never criticized my father in front of me - even when he was doing some pretty horrible stuff to get custody - and I appreciate how hard that must have been - but I'm so glad she did it.) Kids shouldn't have to hear negative things about the parents they love. I did haveto point out that Biomom wasn't the best parent for Kitty. Kitty has to blame someone, and I don't want it to be Kitty anymore.

I can't win this! I want Kitty to have some closure and say goodbye to Biomom, but neither Kitty nor Biomom want this. Is it right for me to want it? I think talking to this woman will damage Kitty's relationship with me, and strengthen her relationship with Biomom. The minute Kitty is out of the house she would go right back to Biomom. That wouldn't be such a bad thing if I thought Kitty could stand up for herself and see the world with the values we've tried to instill in her, but I can see Biomom manipulating Kitty into hating our family and doing anything Biomom wants (probably raising Biomom's kids and ending up in the same type of relationships as Biomom has had - a string of abusive men).

This woman hurt my babies and then threw them away. Why should she get to enjoy them now that I've "fixed" them? Especially since she will probably just "break" them again -when it might be too late to help them heal.

Still when Kitty asked me if she could speak to Biomom I admit I couldn't tell her no. I'm tired of being the bad guy. So I did something awful and then forgot to warn the therapist about it. I told Kitty that it was never my decision not to allow her to talk to Biomom. That it had been her Nebraska therapist's decision (true). We talked about some of the NE therapist's reasons again (primarily that Biomom still blamed the children for the TPR) and Kitty assured me she knew the truth and wouldn't believe that.

That's when I did the bad thing, I said I didn't know if Kitty was ready yet, but that we could ask her therapist. She wanted to ask her EMDR therapist right away, but I said she hadn't known Kitty long enough. I told Kitty she would have to wait until we started seeing the Attachment Therapist -AT - again, and had seen her a couple of times.

So we saw the AT for the first time on Tuesday, and Kitty remembered. The therapist didn't tell Kitty what she wanted to hear, but it's late and that's a long story, so I'll try to post it tomorrow.
Posted by marythemom at 4:10 PM