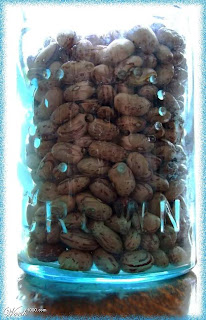 You may remember I mentioned trying out Trust Jars. A concept I'd picked up from Aspenhall who discusses it on her website .punk..rebel..mama. While I don't use it exactly the way Aspenhall does, I love that it is very visual and really helps my children understand when I have to tell them no (like wanting to go somewhere without supervision).

Well as usual with anything that works, my children hate it! Saturday's Family Meeting brought up the usual compaints. During the discussion Bob complained that I'd started the Trust Jars at a bad time, when she and Kitty just happened to be in the FAIR Club. Of course I mentioned that back then she was in the FAIR Club a lot, but I also told them that the Trust Jars weren't based on their behavior in the last couple of weeks, but on the level of trust I felt in my heart - over the long term. Bob claimed that this meant I didn't love her, and I immediately fussed at her for saying that. Then Bear said that was how he'd heard it too (Hubby was teaching scuba so wasn't there). Of course I reassured them, but this really bothered me.

After thinking about it all night I decided to show them how love and trust worked, using the visuals of the jar since it worked so well. On the way home from lunch at Grandma's house I mentioned that I planned to talk to them about Love Jars

when we got home, but was deliberately mysterious so I could talk with the jars as visual aids. Kitty said she knew that my love jar would be overflowing with love. I've gotta tell you that made me feel soooo good!

So I got two clear drinking glasses, and called one of them a "love jar." The kids voted and I started my demonstration with Kitty. I told her the love jar represented my love for her the day she moved in (when I knew her mostly from pictures, our one weekend meeting, phone calls and talks with her foster mom). I filled the jar a little more than 3/4 full. Then we talked about events that happened in the weeks and months following. Every time I mentioned something (positive or negative) from over the 2 years we've known each other_ I added beans to the jar. Eventually the beans were overflowing the jar, and I still kept adding them. Then we got to the present. I did the same thing with Bear.

Hubby's parents were still married and we talked about how because his trust jar was almost full he was able to fall in love pretty easily and his trust and love jars for me filled quickly and completely. We talked about how a parent's love for a child was different then romantic love. A parent's love doesn't require trust. Romantic love does. I wanted them to understand that we love them completely no matter what they do. 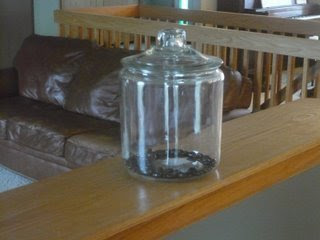 Then I demonstrated for them my own trust/love jar with other people. My parents got divorced when I was 5, my sister and I had a lot of men/trust issues. By the time I met my future husband, I would have to say I had major attachment issues. I filled my trust jar about a quarter of the way full (Hubby thought this was generous). I told the children that was how much I trusted men. I told them that when I met Dad I didn't trust him at all and I pushed him away - to prove that he was going to leave me (Are you listening Kitty and Bear? Sound familiar?).

I added a few beans to show them how much I trusted Hubby to love me and not leave me after one year of knowing him and him staying around no matter how much I pushed him away (my trust jar was about 1/3 full and my love jar about 1/4 full). We talked about how hard this was for Hubby. When we got married after 1 1/2 years of knowing each other my trust jar was still a little less than half full and my love jar was a little less than that. I added more beans for when Bob was born and he didn't leave AND he changed lots of diapers (I probably should have added more beans for the fact that he stayed while I was pregnant - I gained over 70lbs!). My love and trust jar didn't get full until we had been married 4 years (and my trust jar was still a little below the top - Hubby still thinks that's generous).

Then I did the kids' trust jar for us as parents. We all agreed that Bob's jar would be full. I was losing my audience so I filled Kitty's jar about 1/4 of the way full (on the day she came to live with us) and then quickly ran through her history with us and ended up with her jar a little less than 2/3 full. I asked her if that seemed about right. She agreed.

For Bear we slowed down and I asked him how many beans I should add for each event. I started with 2-3 beans for when he first got here, he said it should be a little more. Then we talked about his first fight with Hubby and how much the fact that Hubby didn't hit him effected his trust for us. We talked about his horrid nightmares about the devil when I stayed with him all night and comforted him. We talked about the many times he ran away, and the time he got an injury during a fight with Hubby and the agency removed both him and Kitty for a week, we talked about us pulling him out of Summer Camp when he requested it, sending him to residential treatment, visiting him twice a week the whole 7 months, bringing him home again, adopting his sister but not him, the gun incident in Summer School, adopting him, not allowing out classes, getting all As on his report card... In other words we hit all the highlights, mostly of him pushing us away and us still being there. 4-12 beans at a time we got his trust jar up to a little less than 2/3 full. (I still think that's generous).

I think the kids get that we know they don't trust or love us completely and that we're OK with that. That we know what they've been through and how hard it is to trust.

We briefly talked about birthmom and how full (or rather not full) her trust jar probably was/is. I didn't want to go too deeply into that can of worms though.

Finally I released them from this long session! Believe me it was longer than this post. Still, I'm very glad we did it.
Posted by marythemom at 10:23 PM

Great idea Squeaker. I am so proud and so gonna have to use this. I sent the email to your home address.
Hugs!
Squeaker II