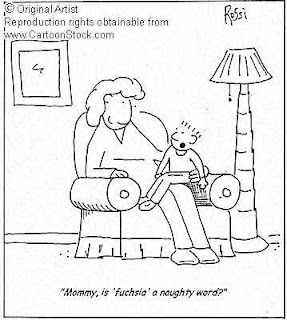 So on the day after the chapel session where the topic was "be quick to listen, slow to speak, and slow to anger," our Kitty had an episode that really brought home the "slow to speak" part of the message! During lunch one of the children at their private Christian school thought that her plastic container of fruit was closed and reached in front of her and poked it right in the middle. It was open and peach juice went everywhere! Kitty pulled back and yelled, "What the F___!" Yes, she dropped the F-bomb right in the middle of lunch and everyone heard her. She was horrified!

In our house I'm pretty strict about "No No" words. No one is allowed to say "crap, shut up, stupid, butt, Jesus Christ (unless they are praying)...", call each other names, or of course use 'real' cuss words. We've been pretty lucky in that our new children didn't come to us cussing like sailors, unlike many kids in foster care. Still I know I'm stricter than most parents on this, just like my mom was with me. For the most part it's been a neighbor boy that's been the worst offender, and we've experimented with not allowing Ponito to play with him for that reason.

The kids have been saying that Ponito does cuss when we're not around, and they're probably telling the truth, but as we've pointed out to the kids many times, they don't really want us to take a kid's word for something we didn't see ourselves because that will lead to tattling and lies to get someone else in trouble. Tattling is not encouraged here (yes, we've emphasized many times that it's not tattling if someone could get hurt or is getting hurt).

Recently Ponito got busted on the cussing (something we expected). If you say something often enough, it's going to slip out when you don't want it to. Which is exactly what happened to Kitty.

The kids have started using the phrase, "What the frick?!" I don't like it and I've fussed at them for it many times. The problem is that Kitty has the "real" phrase in her vocabulary (my guess is that while Ponito and Bob have certainly heard the phrase before, and may have even used it once or twice, it is not a part of their lexicon. I think this is why Kitty slipped up. It's going to be very hard to help her remove both phrases from her active vocabulary.

Hubby hasn't totally agreed with me about all the No No words (he doesn't see a problem with crap or butt for example), but he's supportive and he doesn't use them either. For a long time butt was not a nice word in the elementary schools, apparently now it's acceptable. Words like crap offend many people including Grandma. I've often told the kids they can say what they want when they don't live with me anymore, but then give them the example of an issue I had in college:

With my mom being as strict as she was, the first thing I did when I went off to college was to start cussing like a sailor! Half way through my sophomore year, my roommate and I realized we had a problem - we couldn't stop cussing! And we realized that could be pretty embarrassing at some point (like Kitty in school). So we decided to bet to see who could go the longest without cussing. We were sitting at the table studying. Not 2 minutes after we made the bet and went back to studying, the phone rang startling us both and one of us (I think it was my roommate) jumped and said "F___!" Immediately realizing what what she'd done she blurted out, "Oh Sh__!" We laughed, but did realize this was going to be harder then we'd thought.

At that point I made a conscious effort to stop cussing. It hasn't been easy, but now, even if I unexpectedly drop something on my foot I do not cuss. The few times I have cussed it has been rarely, but deliberately, sometimes to get my children's attention and drive home a point.

I think what happened with Kitty may have helped make my point this time. - You can't use certain words in other places and not find them slipping out in others (on the job, in front of small children or clients, in front of the President of the United States, in front of little old ladies at church...). This can get you in trouble, and even fired.

Kitty has needed quite a few reminders about the phrase, "What the frick" in the last couple of days, but she's accepting the correction - just like when she cracks her knuckles (which makes me crazy). She's working on it, but it's mostly an unconscious habit (although she often cracks her knuckles deliberately when she's mad at me). I'm not punishing her in anyway for either bad habit - just gently correcting her. I think in this case she's motivated to stop!
Posted by marythemom at 9:06 PM