So in the car on the way to work I confronted Hubby on his not-so-private comments regarding how I handle Bob. I told him it hurt my feelings - a lot, but that I thought it was just me being over sensitive until I talked to my mom and she agreed with me. I knew he hadn't intentionally hurt my feelings - in the 16 years I've known him he has almost never been anything but supportive and empathetic. I think this was one reason I was so surprised. Then I asked his advice on how he thought I should handle Bob. (Great minds think alike Denise!) I expressed my worry that Bob might be bipolar like the rest of my family.


Hubby got defensive because he thought Mom and I were suggesting that Bob take meds (which Hubby is pretty adamantly against unless there are no other alternatives. He thinks I do not need them either). I reassured him that I didn't think Bob needed meds, I was just very concerned. There are so many issues it could be (the new kids, raging hormones - which are supposedly worse before they start their period because the hormones have nowhere to go, holidays...). We talked for awhile about what could have caused her behavior, how to handle it, and whether or not we should put her in therapy.

This topic led into Hubby's issues in dealing with Kitty that morning. Ironically it was very similar to my issues with Bob.

Kitty had told Hubby the day before that she would eat all her lunch (she'd taken a larger than usual lunch, and has major appetite issues due to her ADHD meds - we've had to work with her on eating, at least something, even though she's rarely hungry.) While she was making breakfast and lunch for the day, I happened to glance in her lunch box and realized that it was almost full from the day before. I mentioned it to Hubby. He called her on it and she immediately got defensive (she cannot take criticism, even implied, from anyone but me, and even that is hard on her). Kitty started yelling at Hubby and accusing him of yelling at her - he spoke firmly, but had never yelled. I reminded her that when she feels criticized she feels yelled at, and that Dad was NOT yelling at her.


She and Hubby kept at it. I tried to stay out of it, only stepping in to ask Kitty to calm down and to remind her that Dad was NOT yelling at her. Often if they go at it long enough, and only one parent engages with her, Kitty will calm down. Not so much this time.

In the car, I reminded Hubby of the Beyond Consequences training we'd taken and the little bit of work he'd done with the attachment therapist. I told Hubby that Kitty had shut down and was in "flight, fight or freeze mode" almost immediately after his first sentence. Hubby felt very persecuted by mine and my mom's reaction to his critiquing me, and now by my saying he was parenting Kitty incorrectly. He told me that he felt persecuted/ crucified and shut down for awhile.

After a little while he expressed his frustration with not being allowed to parent Kitty. He felt kept out of the attachment loop (unfortunately that's how it works, the child attaches to one parent and only then gets to the point that they can start working on relationships with others). He felt that he was not allowed to say anything to Kitty because she would take it the wrong way. I explained to him that the AT and I weren't deliberately keeping him out of loop, and that I wasn't saying he couldn't parent Kitty at all, just that he needed to be aware that it was pretty pointless to talk to her after she had shut down. We talked about how to approach her later when she wasn't activated.

At that point, we talked about my dead car for awhile and what to do next. Then we talked about how many people we owed money to. Hubby finally hit his overwhelm point and we pretty much stopped talking for the rest of the trip. 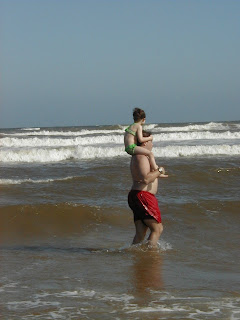 Quite frankly I don't know how we does it. He IS depressed, whether he agrees with my mom and I or not. Our life IS incredibly stressful. He doesn't sleep well, and he's taken the weight of the world on his shoulders (in the picture it's only the weight of our daughter). I couldn't do as well as I am (not that that's saying much) without major support (THANK YOU ALL!!) and medication!

Not sure what to do about blogging all that's gone on this week! I've gotten part of Tuesday done and the rest of the week has been just as eventful! *sigh*
Posted by marythemom at 1:49 PM

I am so grateful to have a wonderful husband who supports me and helps me through rough times. Then every once in a while I realize that I am that for him, too. In good marriages like you and I have that's what spouses do for each other. You say you don't know how you'd make it without his support, but I'm sure he feels the same way about you.