It's beginning to look a lot (less) like Christmas 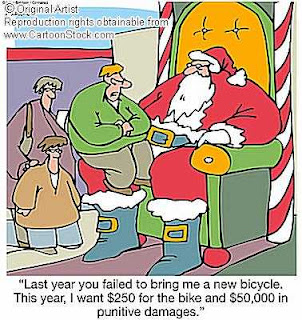 Meltdown city again with Kitty. Saturday nights all the kids go to Grandma's for the night (yes, I know we are blessed and Grandma is masochistic!). Kitty came downstairs with a HUGE suitcase. We argued for 10 minutes that she didn't need to take ALL her stuffed animals with her for an overnight visit. She finally switched to a smaller case. Bob told us the next day that Kitty had been planning to run away. *sigh* 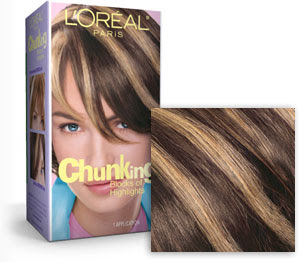 Turns out that one of Kitty's biggest complaints was that Kitty was not happy with what she got for Christmas. She got many things on her list, but she wanted what her sister got - highlights for her hair. Kitty has always wanted to be blonde (which of course would not go with her coloring), and no matter how many times I tell her others would kill for her naturally wavy black hair, she of course hates it. The private school has a policy against unnatural colors and highlights so I was very resistant against doing anything to Kitty's dark hair because anything I did would show dramatically.

Bob on the other hand with her light brown hair could have subtle highlights without looking noticeable different. I was hoping it would give her a confidence boost (she's my introvert and I know she's going to have a tough time going to public school). I have always tried to emphasize that my kids are different, and therefore I never give them the same presents, but I guess in this case it didn't work.

I asked Bob nicely if she would share (I knew there would be plenty in the bottle). Bob very sweetly said yes. Kitty asked if I'd had to bribe Bob to share, and I think she was impressed that Bob hadn't needed incentive.

Kitty has been fighting doing schoolwork and I told her yesterday that because she hadn't been doing the full amount each day that she would have to work this weekend. This did not make her a happy camper. I asked her to do 3 pages in every subject (total of 18 pages) while I went shopping with my mom (to vent and get her opinion on the biomom issue). Kitty was very proud of the fact that she'd finished the pages in less than an hour.

So when I told Kitty she could have highlights if she finished 2 more pages in every subject she was ecstatic at first. She begged me to stay in the room and keep her company. All the other kids were enthusiastically playing PS2 (got a new game for Cmas) so I hung out with Kitty. I helped her with her word building PACE, and read a book while she did math and science (I did discover that she's been working the workbooks out of order and made her go back and finish one before she started the next).

Kitty required a lot of assistance to stay on task. She could hardly tolerate the noise the other kids made on the other side of the house. If she didn't understand something, her first instinct was to write anything, and fix it when she did corrections. Having something to look forward to, while an amazing motivator, actually made things more difficult for Kitty because she had to wait. She kept saying she was never going to be able to finish. I pointed out she'd done more work in less than an hour, but that didn't help. I got to the point that I ignored her and that seemed to help. (I was laying right next to her so it's not as bad as it sounds).

She did eventually finish and I gave her a few face framing highlights. They were noticeable enough for her to be happy, but I don't think the school will notice. Both girls look great.

In an attempt to better medicate Kitty’s bipolar disorder, her psychiatrist upped her Trileptal and Geodon and began weaning her off of Zoloft (anti-depressants can trigger mania). Kitty did better on the increase in meds, but as we’ve reduced the Zoloft we saw more and more meltdowns and issues. As of late last week we completely removed the Zoloft (looking back the holidays might not have been the best time to do this!) We were informed by our other daughter that Kitty has not only been threatening to jump off a bridge (suicidal statements to us have been on the increase as well), but that Saturday night she actually packed her suitcase intending to run away. She tried to take the suitcase to Grandma’s (to run away from there I assume), but I refused to let her take that large a bag to Grandma’s. She did not end up running away. Bob did not tell us of Kitty’s plan until Sunday afternoon.

Kitty’s psychiatrist is out of town until January 5th (yes, she already has an appointment for that day). I talked to the on call psychiatrist and Kitty started back on 50 mg of Zoloft today (she’d been dropped to 25 mg for the last week and a half and has been off of it for a few days).

It’s the holidays, Kitty was pre-menstrual until yesterday, we’re mucking with her meds, she felt Bob got a better Christmas gift than she did, she’s being forced to do schoolwork during the holidays, and I’ve been so stressed that I’ve been spending a lot of time in my computer cubby (of course my teenage children don’t want me bugging them either so this isn’t entirely a big deal), and did I mention it was the holidays?! I'd say I can't wait for them to go back to school, but that's full of pitfalls for Kitty too.

Posted by marythemom at 2:38 PM

I hope the med change helps!