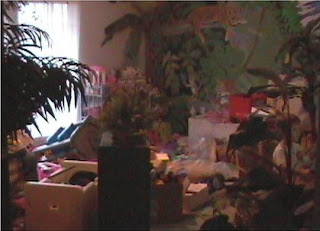 Chores Friday included cleaning the playroom. Grandma hasn't been able to get the kids to do much of anything so has pretty much told them to dust and vacuum - and they don't really do that.
After talking to the insurance company, calming Kitty down (she was convinced the other kids were laughing at her), I decided to address the fact that the kids were playing in the playroom instead of cleaning it.
Bob was picking up miniscule pieces of stuff in slow motion. Kitty was laying around watching her and claiming to be taking a break because she was tired and/or ill.
I tried just supervising, but that didn't help. I threatened to throw away all the stuff I had to clean up. A bit of an effect on Bob, Kitty started whining that she was sick.

The neighbor who is a teacher at the private school brought by Bob's Texas History workbooks so she could review all weekend.

We realized we were late to Kitty's therapy appointment. During which she spent the whole time complaining she was hungry and had nothing to talk about (typical lately, an obvious distraction as well). After therapy and on the way home we talked about how her feelings are related to eating.


Kitty has always blocked her feelings. She doesn't listen to her body. She even encourages people to pinch her arms to show them that she has no feelings there. She "plays" roughly and has no idea how to handle it when it increases beyond her comfort level. She was "play fighting" with a boy and accidentally hit him in the nose - giving him a nose bleed. Everyone agreed it was an accident, but she has no idea how to prevent it from happening again.
She is not ticklish and appears to have no idea if food is literally dripping off her face. Like Bear she has high psychosomatic illnesses. (Commented on by the psychologist giving the results of her school assessment).
After an hour of complaining that she was starving during therapy, I mentioned to Kitty that she was probably dissociating/ distracting herself from her emotions (she denied this of course). We talked about how she used to take medications that kept her from being hungry, and we kept telling her to go ahead and eat. Now she is probably on a med that is doing the opposite. I asked her to try to be aware of how much she is eating (lately more than a starving teenage boy and craving more!). We talked about how she spent so many years denying her emotions.
The subject changed to why Bear is angry at Biomom. I tried to explain that Bear's heart was damaged because Biomom wasn't able to parent him well. Now Bear doesn't feel safe trusting anyone with his heart. So he pushes people away so no one can ever get close to his heart. I also added a little about how his early childhood was different from hers (biomom's abusive men tended to beat him up). We talked a little about how hard it must have been for biomom, having four kids, aging out of the foster care system, running away from her problems (pointed out that Kitty and Bear do this too)... I also touched on how the chemicals in Bear's body were messed up, and that in residential treatment they found medications that helped him, but he still had a lot of things to work through before he was safe to come home (Bear was able to come home from RTC when his bipolar disorder received proper treatment).
Hardest part for me to remember, is to always respect the relationships (no matter how tempting it is to put down or criticize the biofamily). I always speak of son (and biofamily) with love, but honesty, and try to explain why he might have done the things he did. We talk about the things he did that made him unsafe to be around, but how much we love him anyway.
Mostly we emphasize keeping everyone safe.
Posted by marythemom at 12:19 AM