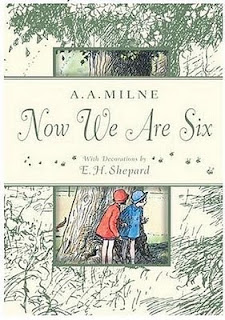 I ran across this article while looking for poems for Bob from my favorite book. It is so sad for me that the descriptions at the end are so dead on for Kitty and Bear. Developmentally Kitty is 6. Bear is Narcissistic through and through. *sigh*

"Now We Are Six" - http://www.halcyon.com/jmashmun/npd/six.html
[Apologies to A. A. Milne.]

If you had a narcissist for a parent, you lived in a world governed by whim enforced without mercy.

Narcissists have normal, even superior, intellectual development while remaining emotionally and morally immature. Dealing with them can give you the sense of trying to have a reasonable discussion with a very clever six-year-old -- this is an age when normal children are grandiose and exhibitionistic, when they are very resistant to taking the blame for their own misbehavior, when they understand what the rules are (e.g., that lying, cheating, and stealing are prohibited) but are still trying to wriggle out of accepting those rules for themselves. This is the year, by the way, when children were traditionally thought to reach the age of reason and when first communions (and first confessions) were made.

Having a narcissist for a mother is a lot like living under the supervision of a six-year-old. Narcissists are always pretending, and with a narcissistic mother it's a lot like, "Let's play house. I'll pretend to be the mother and you pretend to be the baby," though, as the baby, you'll be expected to act like a doll (keep smiling, no matter what) and you'll be treated like a doll -- as an inanimate object, as a toy to be manipulated, dressed and undressed, walked around and have words put in your mouth; something that can be broken but not hurt, something that will be dropped and forgotten when when something more interesting comes along.

Selected Characteristics of Normal Six-Year-Olds
[Based on Your Six-Year-Old,
by Louise Bates Ames and Frances L. Ilg.]

The items below are not intended to be a comprehensive description of six-year-olds, but only the selected bits that seem to be related to adult narcissists' traits discussed
elsewhere [and, yes, I really did compile the traits list weeks before finding this little book]. Besides being difficult and bewildering, six-year-olds are also wonderfully warm and enthusiastic, fine companions, active, curious, intellectually ambitious, philosophically speculative, very interested in the world and how it works, fond of novelty and amusement -- games, music, stories, outings, adventures.

My interest here is in pointing out that many of the narcissistic characteristics that are abnormal in adults are completely normal at six years of age and that the survival of these childish characteristics into adulthood is, essentially, immaturity rather than bad intentions. But bear in mind that, while everyone who grows up passes through this stage of development, most of us spend only a few months this way before moving on to more integrated behavior.

Narcissists, on the other hand, apparently spend the rest of their lives in this state of highly volatile ambivalence and uncertainty. I don't mean to play down, in any way, the very bad effects adult narcissists have on their own children, but, for those who've survived being raised by narcissists, it may give a different way of looking at family history. [See "It's A Good Life" for one person's idea of what it would be like if a six-year-old ran the world -- and, I'll add, what life may seem like to a six-year-old with a narcissist for a parent.] It has also bothered me that the little clinical literature I've found is quite hostile to narcissists; I certainly know that they can be utterly impossible, but the truth remains that the narcissists I've known were genuinely lovable about half the time -- the problem being that they want to be treated as "special" in ways that they just ain't special and will hate you for loving them for what they regard as the wrong reasons (though most of the rest of us are far less demanding and are simply pleased when attractive, decent people love us for any reason, special or not).

"Your typical Six-year-old is a paradoxical little person, and bipolarity is the name
of the game. Whatever he does, he does the opposite just as readily. In fact,
sometimes the choice of some certain object or course of action immediately
triggers an overpowering need for its opposite." (p. 1, the first paragraph of
the book) [Emphasis in original] Kitty and Bear

"Six's reversals are truly something to be reckoned with." (p. 2) "I love you" rapidly changes to "I hate you." (p. 2, 6) Kitty and Bear (Bear has never meant "I love you," but he can switch from angry to calm in seconds and vice versa)

stubborn and can't make up mind (p. 2) Kitty and Bear (OK this is the whole family!)

once started, will stick to a course of bad behavior or bad judgment regardless of the inevitability of being punished for it (p. 7) Kitty and Bear

asks to be flattered and praised as "good," even ("rather sadly and touchingly") following his worst behavior (p. 6) Mostly Kitty

can't accept criticism (p. 7) Both, but Kitty is most obvious about it

feelings are hurt over very small criticisms, comments, failures (p. 6) Even the perception of criticism is overwhelming for Kitty and Bear is very sensitive too

"He is so extremely anxious to do well, to be the best, to be loved and praised, that any failure is very hard for him." (p. 6) Neither can handle the thought of not doing well.

defiant, pert, fresh, snippy (p. 6, 17) Kitty and Bear (especially if you're asking Bear questions, even innocuous ones - he'll bite your head off)

belligerent, verbally and physically aggressive (p. 21) mostly Bear although Kitty has her moments

threatens, calls names, gets physically violent (p. 21) Bear and Kitty although Bear threatens others, Kitty tends to threaten self or to not do something

jealous, envious (p. 7, 21) Both probably, but Kitty is very verbal about it

to make sure of winning, will cheat or make up own rules (pp. 21-22, 45) Bear mostly, he will insist you are wrong and deflect

complains that others are cheating and not following the rules (p. 45) Always because they have to win and it justifies their behavior ("No one else is washing the dishes either.")

some are very cruel to younger children (p. 22) Kitty is cruel, but mostly because she gets angry when they act like young children (cruel and self-centered) - ironic isn't it?! Bear is just careless with others, kids get hurt when he's playing with them because he doesn't always control his own strength.

does not always tell the truth (p. 16) Mostly Bear

will not admit to wrongdoing (p. 41) [Note: A technique is given for getting the facts out of kids that also works with narcissists: instead of asking if they did it, ask how they did it.] Kitty and Bear (I already knew not to ask why they did it, I like this idea and will definitely try it!)

very critical of others' conduct (p. 22) Mostly Kitty, Bear only if it benefits him

"Many children think their father knows everything -- even what goes on at home while he is at work."(p. 16) Kitty for sure - I have no idea about Bear

thinks his teacher knows the best and only right way of doing things; may not know which rules to follow when school rules differ from home rules (p. 18) Kitty

"highly undifferentiated -- everything is everywhere" (p. 7) No idea what this means!

"random and unconstructive expenditure of energy" (p. 31) probably not either one, unless you count their fidgety ADHD

more interested in merely handling or using tools than in what is accomplished with them (pp. 53-54) BEAR

less interested in actual final products than in whatever he may be doing at the moment (p. 56) Bear?

"Sixes love to dress up and pretend they are somebody else...." (p. 49) Kitty! She wears princess dresses and high heels to walk in the backyard! Bear changes personalities whenever he finds a new girlfriend.

Posted by marythemom at 9:54 PM

I recently visited your blog. It is a very interesting one. Keep it up.

Wow - this is so insightful. Thank-you for sharing!