No Child Left Behind. 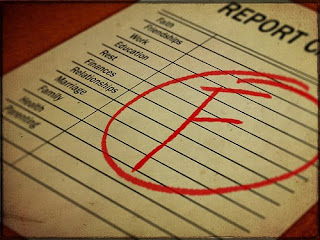 This semester in English, Bear made a 54 for the 1st six weeks, a 64 for the second and on the progress report we received Tuesday he had a 25 for the 3rd six weeks. His final exam score was a 76. Last semester he received an 83 for the semester. If you do the math, this means he makes a 69 for the year - which is failing.

When I looked at Bear's grades online he suddenly had a 35 for the 3rd six weeks. Which brings his final grade up to a 70 - which is passing. (It's a miracle!).

I sent an e-mail to Bear's teacher asking what he'd turned in (classes officially ended last week) that brought his grade up so dramatically. The following is her reply. Remember, this is the teacher that sent me an e-mail last six weeks regarding a super late project that said:

"I showed him how to do the word splash and had another student work with him, I think she did most of the project but, it's done. I felt it was important that he turn something in, I will have to double check but I do think he is passing now or I close to it. "

So here's what she wrote to me regarding the jump in grade from a 25 to 35 that enabled him to pass English for the year. So would you report this? To whom?

[Bear] received 5 Extra Credit points for turning in his completed review and for taking notes during the review lesson. All of my students were given the option to apply these points to any major grade during the last six weeks including SSR or the exam if they did not pass. Bear and I looked over his grades and with the exam alone he had an overall grade of a 69 for the year without the extra credit points. He also received 45 points towards his SSR project for the work he did in Study Skills on the 5/20, which was not entered until yesterday when I was cleaning up my gradebook for that class. We decided then, to apply the extra credit to his SSR project [which he never actually turned in] giving him a 50. This still doesn't pass him for this six weeks, but did give him a 70 for the year. I hope this clarifies his grades. This is his final grade for the 6 weeks. I'm also attaching his cumulative grades. I will be letting the registrar know not to override his grade any higher than the 35, as the default is a 50.
Thanks, [Ms. S]

So would you report this? To whom? Bear is definitely learning that there are NO consequences for his actions. This teacher was copied on the letter I sent to the school about teaching Bear that he could coast on old grades and that teachers will not let him fail.

Is she allowed to let him fail? What happens if he fails? Does she get in trouble somehow? There is obviously a reason she's doing this and it's not because she's a nice person, etc.

Report this to your district Superintendent with a note that if it can't be remedied locally, you will go to the State Ed people. Superintendents do not like that.

Yes, GB's Mom is right. Report it to the district superintendent with a note attached. I don't know the teacher's motivation. If she doesn't have tenure she may be afraid that too many failing student will reflect poorly on her. Even if she is tenured, I've heard that in some states, teachers are somehow "blamed" for the laziness or inability of their students.
I think that's shameful. If a child chooses not to work then he or she should receive a failing grade. Enough Fs and they should have to repeat class and possibly the grade.
When I was in school it wasn't unheard of for students to be "left back." Now it appears to be relatively uncommon. I know of only one child from my three children's school experiences who had to repeat a grade.
I'm aghast at the "No Child Left Behind" practice. On paper it may look sort of okay but in reality it allows incompetent students to pass and eventually go into the working world with inadequate skills. I can't tell you how many store clerks I've dealt with who lack the ability to do simple addition and subtraction. I'll tell them if there are three rows of five items in a box, for instance, that that means there are a total of fifteen items. They look at me openmouthed, as if I had done a mysterious and incomprehensible act. This is while they're laboriously counting the items one by one and losing count... several times.
It's not only lower-level workers who can't read, write or add. I've worked with a few law school graduates who have absolutely no grasp of grammar and whose reasoning power is feeble. How they manage to graduate from law school is beyond me. After a few more decades of this nonsense our country is going to be in an awful mess.
So yes, I share your frustration.

well, having been a teacher all those years, let me play devil's advocate for a second.

I've had many students that were capable of work but refused to do it due to behavior issues. I've always talked with these students and told them how to ammend their ways. When these particular students have learning needs, I also find ways to demonstrate that the student is indeed learning. It's called differentiated teaching. I document the crap out of it, why I'm doing it, how it proves that the student is meeting the standards, etc.

as it pertains to late and/or unfinished assignments, I grade every student using rubrics. If a student has done a portion of the work and scored on the rubrics, that's the grade they receive, even if I never got a completed assignment. Here's why: with students like these, I found absolute failure became a self fulfilling prophecy. Many times I'd get the students again for a different class the following year and I felt the need to create a sound relationship as well.

When I had students on the cusp of pass/fail, I had a stop gap measure for that too. In my grade book I also made marks about behavior, attitude, attendance, etc. It was a 10 point scale with either a 10, 7, 5 or 0 awarded. I assessed these scores for students on the cusp of a letter grade, making a quantifiable analysis as to whether or not I felt a student was worthy of an upgrade or in some cases, a pass/fail.

I do understand your concern about Bear getting by with failing but since his exam score was a pass, as an educator, I'd say that demonstrates understanding of the material/meeting the standards and I probably would have done something similar as his teacher did. In education, failure usually boils down to the standards/comprehension and yes to Miz Kizzle's complaint, that means many dullards squeak through. Remember, the average IQ is only 100 with a derivation of two points on either side (90-110)

I'd still probably report it to the principal and the school district. I've dealt with too many teachers who let kids slide. I hear all the time how great my son is doing and how much he's learning, but NONE of his scores reflect it. They're pushing him to do grade level work, and insist that he is doing just fine with it, but he's still getting failing grades. Just yesterday, he came home and proudly announced he's passed off all his times tables through 12. Great! That's awesome! What's 6x8? Silence. Then he starts counting on his fingers and still gives me the wrong answer. Sometimes he even says 14 (6+8). There's clearly no mastery of the subject, let alone basic foundational comprehension...but he's still passing them off! I really don't think it does kids any favors to let them slide through. If they really do understand the concept, great, give them credit...but let's cut with the pretending.